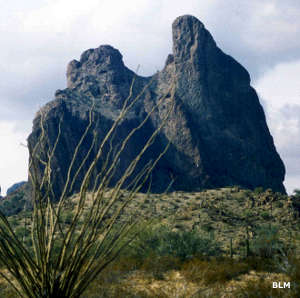 The northeastern wall of the Eagletails rises abruptly from the desert floor but the other side of the ridgeline descends in a more gentle manner. Courthouse Rock itself is a large granite monolith that attracts its fair share of rock climbers. Hiking around here will show you several different layers of rock strata with high spires, sawtooth ridges and natural arches in some areas. Some of the desert washes run up to eight miles long, and Courthouse Rock isn't the only monolith sticking up...

To get there: take Interstate 10 to the Tonopah exit and go south. Just south of the Interstate you'll find the Harquahala Valley Road. Turn right on that and go about 5.3 miles to Courthouse/Centennial Road. Courthouse/Centennial is a well-maintained dirt/gravel road. Go about 6.9 miles to the fork in the road. Stay to the right and ignore any roads that go left for the next 4 miles. When you see a sign for Eagletail Wilderness, turn left on that very rocky road (you're going to want high clearance here) and go to the end of the road near the obvious Courthouse Rock. There's a parking area and informational kiosk waiting there.

There are some trails on the property but they are ancient jeep trails, almost nothing is marked and those old trails fade more every year. This is an area where you're going to want a good map and a good compass or GPS device. You'll also want some experience in the use of these things. You'll also want lots of water because there isn't any out there, unless it's raining and you'd have to be certifiably insane to go there in the rain. The above directions take you to the Ben Avery Trailhead. The Ben Avery Trail heads through a saddle in the ridge that rises to the northwest and southeast (where it becomes the Eagletail Mountains - which are actually an ancient volcanic dike that formed maybe 20 million years ago). If you can find, follow and keep to the trail, in about 2.5 miles you'll come into a black basalt area with extensive petroglyphs (Indian Spring). Some of the petroglyphs are in the Western Archaic style and date from maybe 3,500 years ago, while others are more obviously Hohokam in origin and date from about 1,500 years ago. Once southwest of the Eagletail ridgeline, you'll be in the wide open desert plains and bajadas that make up more than the southwestern half of the wilderness area: forget finding any kind of trail markings out there.

Most folks who go to the Eagletail Mountains Wilderness go for either the petroglyphs or the rock climbing. The hunting isn't very good because there's not much water to support wildlife. The countryside is pretty stark and if you find yourself out there on a cold night, well... the countryside is firewood-challenged, too (although you haven't really lived until you've had a good nose-full of the smoke rising from a creosotebush fire).

Another section of the Eagletail Mountains

Typical vegetation and rock formations in the Eagletail Mountains Wilderness 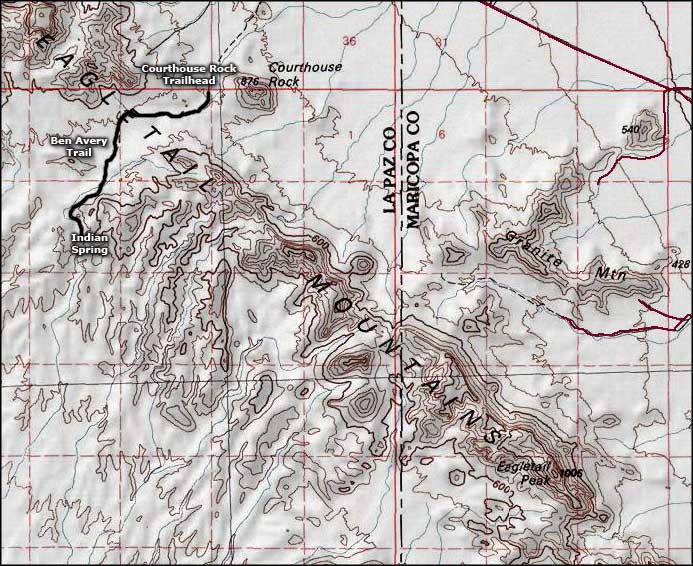 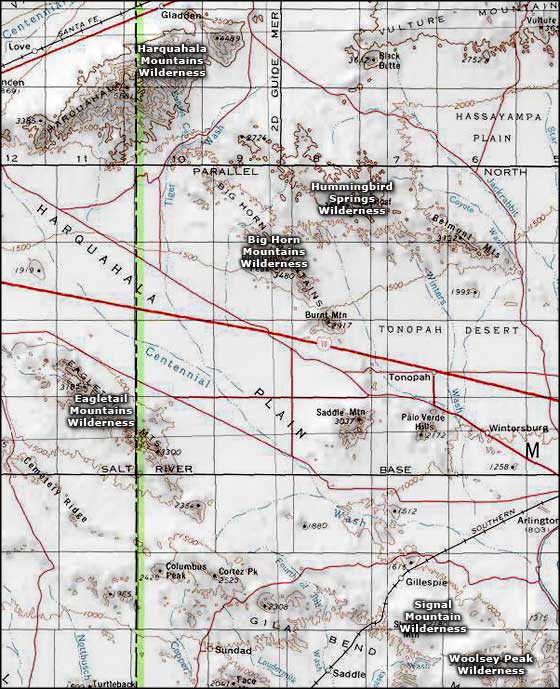