The Sitgreaves National Forest offers the high country north of the Mogollon Rim (the southern edge of the Colorado Plateau uplift, extending from Flagstaff some 200 miles into western New Mexico) and eight cold-water lakes. The Apache National Forest includes land from the south side of the Mogollon Rim down to the high desert around Clifton, and most of the White Mountains of Arizona. 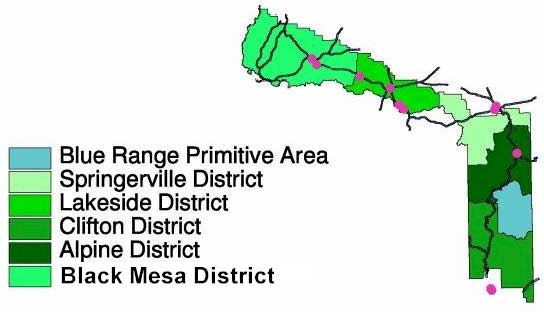 Both National Forests contain many prehistoric sites, some dating back nearly 12,000 years. Some prehistoric sites show evidence of hunter-gatherer activities while others are the remains of large pueblo areas (with cultivated agriculture) similar to what is found on the Hopi and Zuni Reservations today. In between are the cave and rock shelter sites found along the Blue River and in the steeper canyons of the Mogollon Rim. Carved or etched petroglyphs and painted pictographs were left 600 to 900 years ago by the ancient Mogollon and Ancestral Puebloans all over these two forests. After the old tribes moved on, the Apache came in and were still here when the first Europeans arrived.

The first fur trappers came seeking beaver pelts along the Black River around 1825. The first Anglo settlers started coming in about 20 years later, with the Mexican War. And, of course, they rubbed the Native Americans the wrong way early on but it wasn't until 1870 that the US Army established Fort Apache to try to keep peace in the region. Then came the famous 1872 mining law that threw the western states open to full-scale mining exploitation (with little or no regard for the indigenous people who'd occupied that countryside for centuries).

The big copper mines in the Morenci area began digging huge, open pits in the ground. The local military garrisons had to be "beefed" up (pun intended) to properly protect a large influx of ranchers, farmers and loggers who came to supply the mines and the Army. While railroads were built to the mines early on, logging railroads didn't really start until about 1917. But once they started, they ran all through the forests. Today, most of the railroad gear has been removed and a lot of the old track beds have been turned into mountain hiking, biking and horseback riding trail systems.

Scattered through both forests are many well-crafted "artifacts," left behind by early settlers, and many constructions of the Civilian Conservation Corps. Quite a few of these (the work centers at Pinedale and Water Canyon, several lookout locations, and the campgrounds at the Blue and Black Rivers and at Juan Miller) are recognized on the National Register of Historic Places.

An old jeep trail near the Blue Range Primitive Area

Because these days, in hiking, biking and horseback riding, it's the journey that counts as much as the destination, Apache-Sitgreaves National Forest offers almost 1,000 miles of trails through many diverse types of terrain. Many of the trails are part of the White Mountains Trail System. Four of them are National Recreation Trails: Blue Ridge, Eagle, General George Crook, and Escudilla. There are also several barrier-free trails, including the Pintail Lake Wetland Trail and the Mogollon Rim Interpretive Trail.

Because of dramatic differences in elevation, there is always the possibility of sudden storms and changes in weather. Some trails can carry heavy snow into May, others may never see snow. High elevations can mean cool nights, even during the heat of July and August and the seasonal thunderstorms that rumble in during those months. So trail use will vary with elevation and weather exposure. Be safe, be aware, be prepared.

Hunters come for the mule deer, elk and black bear in these woods but they need to be careful because the Mexican gray wolf has been reintroduced in certain areas (and shooting a wolf can be very expensive). Fishermen come to the headwaters of the San Francisco, Little Colorado, Blue and Black Rivers in these mountains. For good fishing lakes there are Woods Canyon Lake, Big Lake, Chevelon Canyon Lake, Willow Springs Lake, Crescent Lake, Luna Lake, Bear Canyon Lake, Black Canyon Lake and Fool Hollow Lake.

Update: Since 2003 major forest fires have impacted large sections of Apache-Sitgreaves National Forest and some areas pictured on this page were fried. The trails are mostly open anyway but there is significant danger from falling trees, flash floods, mudslides and burned out stump holes. 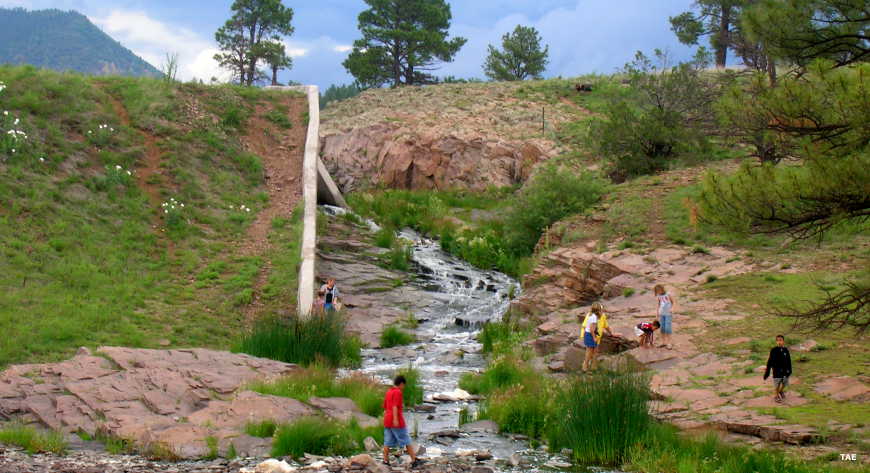