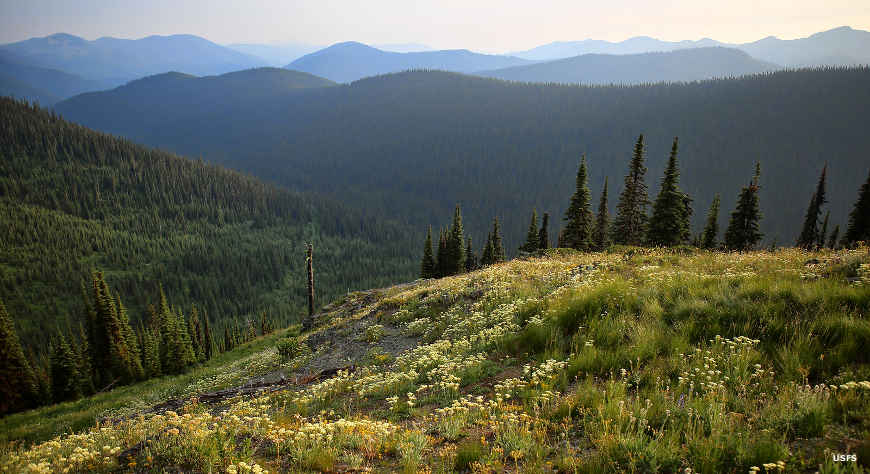 A view along the Pacific Northwest Trail in Salmo-Priest Wilderness 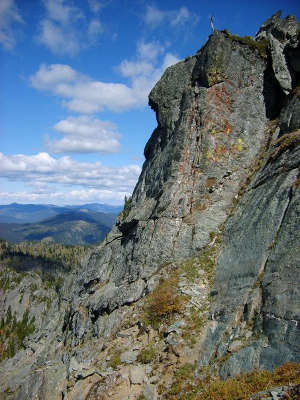 Salmo-Priest Wilderness is a 41,335-acre U-shaped property in extreme northeastern Washington in the corner of the state against British Columbia and Idaho. The wilderness area wraps around three sides of a valley between two major southwest/northeast-trending ridges in the Selkirk Mountains. The two ridges come together at the high point on the wilderness: Salmo Mountain (6,828'). The more western ridge is sharper, steeper and rock-crested while the eastern ridge is rounder, a bit lower, more forested and more accessible. Both ridges have been deeply cut by water flows over the years. The eastern side of the eastern ridge drains into the Priest River drainage of northern Idaho, the rest of the property drains to the southwest and west through the Salmo River and Sullivan Creek to the Pend Oreille River. On the Idaho side of the line, there's another 17,585 acres of roadless mountain/forest area that have been proposed for inclusion in the Salmo-Priest Wilderness.

Most of the forest at Salmo-Priest Wilderness is virgin forest: Douglas fir, western hemlock, western red cedar, larch and grand fir. Some of the western red cedars may be as much as three thousand years old. The greenery is very lush as these woods average better than 50" of precipitation annually. Snow can still blanket the higher elevations well into July. Under the trees you might find elk, mule deer, white-tailed deer, badgers, pine martens, cougars, black bears, bobcats, bighorn sheep, moose, Canada lynx, grizzly bear, woodland caribou and gray wolves. The caribou in this area make up the last surviving herd of woodland caribou in the lower 48 states.

The longest established trail in the area is the Shedroof Divide Trail at 21.8 miles. It follows the upper ridge of the eastern ridge through subalpine meadows and zones of open timber. The trail continues across the wilderness boundary for several miles along the ridge crest in Idaho. On the narrower western ridge crest is the 7.8-mile Crowell Ridge Trail, offering great views into the roadless area to the north. There are several feeder trails that descend and ascend the drainages between the two main trails and interconnect them. The Pacific Northwest National Scenic Trail crosses Salmo-Priest Wilderness east/west.

One of the main ridges in Salmo-Priest Wilderness 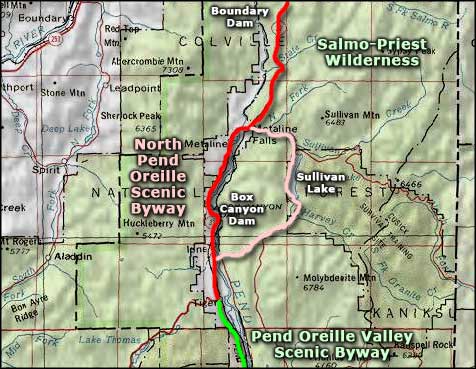