On entering Wichita Mountains National Wildlife Refuge from the west 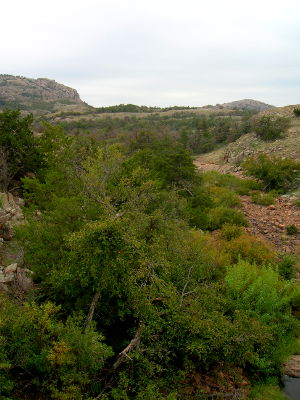 Wichita Mountains National Wildlife Refuge is a 59,020-acre property located atop an ancient granitic landform in southwestern Oklahoma. The Wichita Mountains are part of an ancient reef that was formed about 500 million years ago. The Wichita Mountains anchor the eastern edge of the reef, the Guadalupe Mountains anchor the western end. Contained within the property is the largest remaining piece of undisturbed mixed grass prairie in the southern Great Plains area, saved from the farmer's plow by the proximity of the rock underneath. About 22,400 acres of the refuge is open to the public, the remaining 37,000 acres being kept as a wildlife sanctuary and open to the public only as part of a Ranger-led tour of the property. Congress further designated about 5,723 acres in the southwestern section of the refuge as the Charon Gardens Wilderness Area. That was expanded by Congress in 1970, growing the wilderness area to 8,570 acres and renaming the area as Elk Mountain Wilderness. The road running east/west across the refuge is part of the Wichita Mountains Scenic Byway.

President William McKinley set the property aside as a National Game Sanctuary in 1901, a couple years before President Theodore Roosevelt established the National Wildlife Refuge system with the designation of Pelican Island National Wildlife Refuge in Florida. McKinley set the land aside just prior to opening Indian Territory for non-Native American settlement. Roosevelt upgraded the designation to Wichita Forest and Game Preserve in 1905 and in 1907, 15 Bison bison were set free on the refuge. They have since grown to a population around 650. When the bison arrived from the New York Zoological Park (now the Bronx Zoo), Comanche Chief Quanah Parker and a host of other Native Americans and whites turned out to greet them: bison had been gone from the southern Great Plains for 30 years by then. Congress changed the name to Wichita Mountains National Wildlife Refuge in 1936.

There was a time before the European invasion when the area supported large herds of Merriam's elk (an elk subspecies common across the arid Southwest) but they were displaced by cattle grazing and hunted to extinction, the presumed extinction date being 1906. Today, Wichita Mountains National Wildlife Refuge is home to a herd of Rocky Mountain Elk: 20 cows and bulls were transported to the property by rail from Jackson Hole, Wyoming in 1911 and set free in the North Mountain Wilderness Area. The elk herd now numbers about 800 animals. The refuge is also a home for displaced Texas longhorn cattle, preserved for their historical and cultural importance. Congress appropriated funds in 1927 to purchase 30 longhorns and set them free, also in the North Mountain Wilderness Area. The longhorn herd now numbers about 350 animals. Over the years the US Fish & Wildlife Service has continued to reintroduce species that were common before the influx of settlers (but almost disappeared after the appearance of settlers), like wild turkeys, river otters, burrowing owls and prairie dogs.

The refuge is open 24/7/365 with no fees for day use. The visitor center is open 9 am to 5 pm daily except closed on Thanksgiving, Christmas and New Year's Days. The vast majority of the Refuge is for day-use only. There is a fully developed campground just west of the Visitor Center offering both primitive and RV camping (limited electrical hookups and trailer spaces). Individual sites are available first come, first served while group sites usually require reservations. There are fees associated with camping, too. Backcountry camping is available in the Elk Mountain Wilderness area but requires a permit and permits are limited to a max of 10 per day.

There are about 15 miles of maintained hiking trails in the refuge, most rated as easy. Trails in the wilderness area(s) are unmarked and often indistinguishable from game trails. The Elk Mountain area sees high traffic in the warmer seasons as it is a very popular playground for the rock-climbing set.

I visited Wichita Mountains National Wildlife Refuge (and climbed Elk Mountain) in the fall of 2012, on my way from southern Colorado to Fort Worth, TX. It may seem strange for someone used to living at 8,000' elevation in the Rocky Mountains to go mountain climbing in Oklahoma but I found it a very enjoyable experience. The North Mountain Wilderness Area is well-marked with an 8'-high chain link fence along the north side of the road. There is an area of open range near the west boundary, too, and I found several small herds of bison running along beside me. I tried to visit the Environmental Education Center near Quanah Parker Lake but it was closed for the season. At least there were a few mule deer hanging around outside... I also thought the visitor center offered some excellent exhibits and hands-on demos.

Bison beside the road

One of the water control structures built in the 1930's

Picnic area at the foot of the Elk Mountain Trail

At the Environmental Education Center 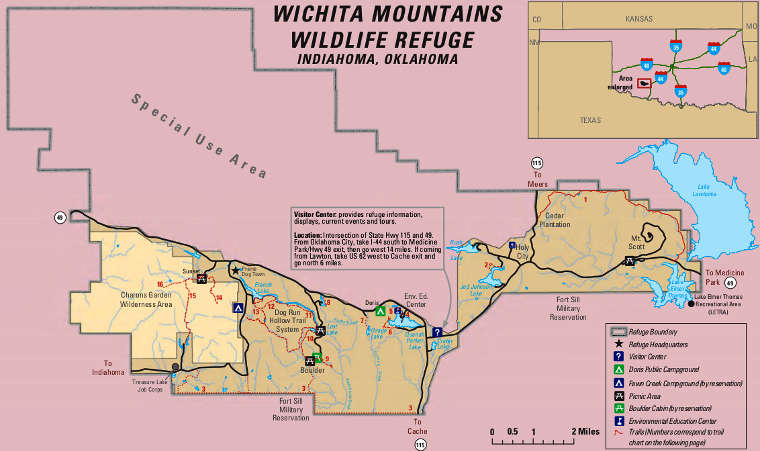