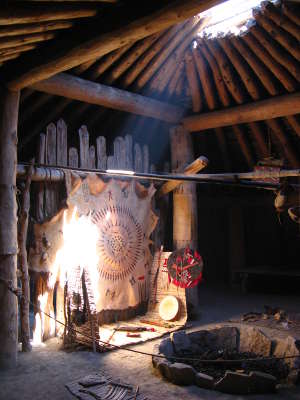 Knife River Indian Villages National Historic Site is a 1,758-acre property that preserves what remains of three Northern Plains Indian villages (built by the Hidatsa, Mandan and Arikara) that were trading centers long before European fur trappers arrived and turned them into major centers of commerce in the Northern Plains (after 1750). The villages were known as Awatixa Xi'e (lower Hidatsa village), Awatixa and Big Hidatsa Village. There are several other sites on the property that offer evidence of human habitation long before the Hidatsa arrived but Awatixa Xi'e is believed to be the oldest of the Hidatsa villages while Big Hidatsa Village was the newest, founded around 1600 CE.

The Knife River Indian Villages are where the Lewis and Clark Expedition spent the winter of 1803-1804 (actually they built Fort Mandan a couple miles away but spent a significant amount of their time that winter among the Hidatsa and Mandan). It was here they hired Pierre Charbonneau as a guide and traveled west in the spring with him and his wife, Sacajawea. They were only a couple days into the journey when she gave birth. It was her presence with her son in the group that made their journey significantly safer as no warring or raiding party of Indians would travel with women and children... That said, a smallpox epidemic broke out in the villages after Lewis and Clark left and the population dropped from about 1600 in 1804 to 31 in 1805. Because the area was a trading center, new folks moved in but smallpox was a continual problem until a major epidemic hit in 1837-1840. The kill rate was above 90% and when it was over, the survivors abandoned the area and migrated north to the village of Like-a-Fish-Hook. Despite warnings spread throughout the Native American population, Native Americans still visited the trading posts in the area and exposed themselves to the disease. At the same time, many raided the abandoned villages and took infected blankets, household tools and horses back to their own encampments... which killed even more Native Americans.

Today, Knife River Indian Villages is a site where the old earthlodges have collapsed and left rings of debris around depressions in the ground marking where the lodges once stood. At the time of the Lewis and Clark visit, there were more than 200 earthlodges in the area, housing between 4,000 and 5,000 people. Some earthlodges were large enough to accommodate 20 family members, a few dogs and a couple horses inside. When Lewis and Clark visited, they found a vibrant culture where women sat on platforms and sang to their gardens, young boys practiced with their first bow and arrow, young girls played with leather dolls and old men shared their tobacco and stories of past glories. Fur trappers and traders passed through regularly so up-to-date news about other areas was always available. Hidatsa, Mandan, Lakota, French, English and perhaps even German could be heard in the village. Fur trappers had appeared in the early 1700's and by 1750, traders were offering goods from Europe and the East Coast colonies in exchange for buffalo robes and furs.

In the early 1800's, the area looked significantly different than it does today, primarily because most of the area was turned into farmland in the mid-1800's. Since the National Park Service came into ownership of the property in 1974, significant effort has gone into restoring the landscape to the native shortgrass prairie, exotic grasslands and 450 acres of hardwood forest visitors see today.

Knife River Indian Villages National Historic Site is a day-use only park. Summer hours: 8 am to 6 pm, Memorial Day through Labor Day. Winter hours: 8 am to 4:30 pm, Labor Day to Memorial Day except closed for Christmas Day, Thanksgiving Day and New Year's Day. There are no fees involved. The reconstructed Earthlodge is directly behind the visitor center at the head of the trails that explore the site. 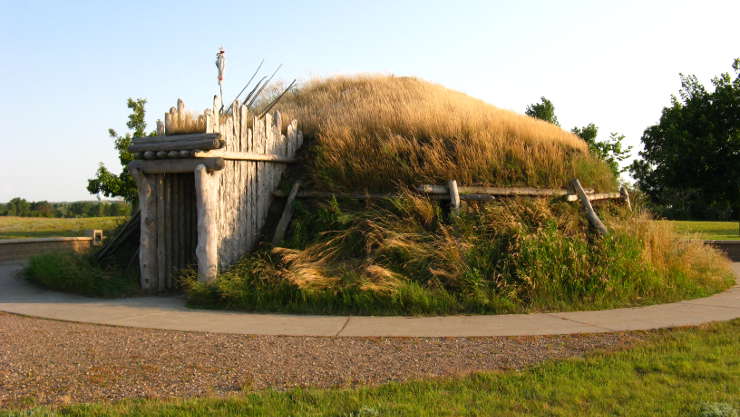