Santa Cruz Lake from the road in 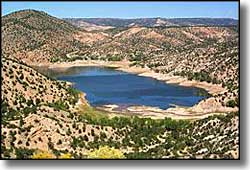 Santa Cruz Lake is in that place near Chimayo where the Santa Cruz Dam holds up the descent of the Rio Frijoles and Rio del Medio for a while. Built in 1929, the dam is 90' deep and 535' across, making a lake that covers 121 surface acres. While the lake depth may vary up to 30' in a year, it normally holds water year round. The west side of the lake is against a large granite buttress. The east side of the lake is bounded by cottonwood, pinon, juniper, and mountain mahogany. The surrounding terrain is mostly rugged, rolling foothills and wide open mesas separated by steep canyons. The climate is semi-arid, with most rainfall occurring from May through October, the bulk of that happening in July and August. Snowfall happens any time between November and April.

Santa Cruz Lake Recreation Area offers two campgrounds: the Overlook Campground and the North Lake Campground. Both offer picnic shelters, fire grills and restrooms. North Lake Campground also offers drinking water from April through October. There is a 14-day stay limit and camping is not allowed near the shore. Because of dangerous underwater currents, swimming is not allowed at Santa Cruz Lake although, with shoes on, you can wade in up to your knees only. Boats are restricted to trolling speed and no whitewater wakes are allowed. In addition, each boat must carry US Coast Guard approved personal flotation devices for each person in the boat. And anyone 12 or younger must wear that personal flotation device at all times while on the water.

While Santa Cruz Lake is regularly stocked with Rainbow trout, the odd German brown trout is occasionally caught. Ice fishing is not allowed because the ice is never even reasonably safe. A fishing license and valid Wildlife Habitat Improvement stamp is needed. Bag and possession limits are 6 fish per license holder.

The Santa Cruz Lake Recreation Area includes some 6.4 miles of moderate to difficult hiking trails. Along some of these trails you may come across artifacts and prehistoric sites: leave whatever you find wherever you find it.

On the shore of Santa Cruz Lake 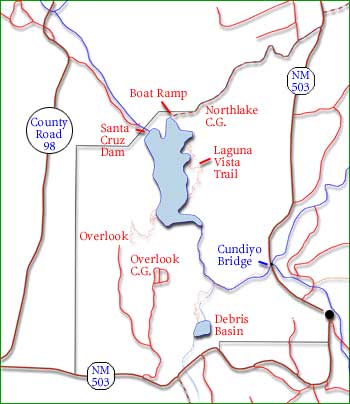