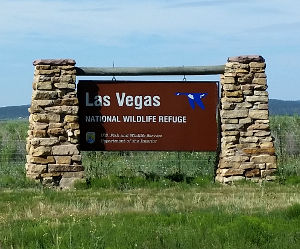 Las Vegas National Wildlife Refuge is just southeast of Las Vegas on a paved road. I came here just before sunset during the spring migration and was hard put to get some decent photos: nearly the whole place was locked up. Most of the Refuge is east of the pavement and hard to see from the road. There were quite a few birds around but I didn't disturb any of them, what with the ranger I had glued to my back bumper... I did stop and hike over to the Overlook for a couple of shots but then I went to the end of the pavement and spent some time trying my luck at McAlister Lake.

More about the Refuge itself: Las Vegas National Wildlife Refuge sits on a high plateau in the foothills of the Rocky Mountains with river canyon walls dropping below the refuge on three sides. Above the timbered canyons, a series of ponds is encircled by the refuge. This is an environmental zone inhabited by plants, birds and animals native to both the plains and the mountains. In addition, Las Vegas NWR is a major stopping and resting point along the Central Flyway for many, many species of migratory birds.

A view from the overlook platform

Because there is so little open habitat available for wildlife and birds these days, the refuge actively manages this property to ensure plentiful food, water and shelter for non-human visitors and residents. Peas, wheat, barley, and corn are planted to provide food and living/hiding space for the wild visitors and the pond levels are raised and lowered to provide the best mix of nesting, feeding and rearing habitats for waterfowl. And as careful grazing rejuvenates native grasslands, there are even cattle on the property between May and October.

For all you bird-watchers out there, Las Vegas NWR records 271 species, 80 of which nest here, 50 of those being neotropical migrants (birds that spend their winters south of the border). The refuge also sees 14 species of raptors, including 20-to-50 bald eagles that winter here, attracted by the open waters and the hundreds of tasty, well-fed ducks and geese just hanging around. There are birds flying through here in all seasons, even sandhill cranes in the fall and winter.

State Highway 281 and County Road 23 make a horseshoe loop tour through the heart of the refuge and you can drive this any time of year. You'll pass cottonwood groves, marshes, ponds, lakes, brush thickets, and grasslands along the way. You'll want to go slow because there's a lot of four-footed creatures out here, too. At the southern end of the loop is the Lake McAlister Waterfowl Management Area, owned and operated by the New Mexico Department of Game and Fish. This is the only lake in the refuge that is stocked with rainbow trout and offers regulated seasonal angling. All other ponds and lakes are closed to fishing. The refuge also offers a limited dove and goose hunting season: contact the refuge manager for draw and permit information.

On Sunday afternoons (1:00 PM to 4:30 PM) in November, the refuge offers a 4.5 mile tour of the hidden ponds during the height of the fall bird migration. This is a very special time and draws lots of visitors.

Update, July 2015: Most photos on this page were taken during a fishing trip with my grandson. We had thought we'd go to McAlister Lake and try our luck. When we got there, the lake was almost dry... so we turned around and headed over to the Upper Pecos River where we had a great day fishing. On previous visits to the refuge I'd always found the countryside a bit brown and the lake full. This time the lake was dry and the countryside was gorgeously green.

McAlister Lake, at the south end of the Wildlife Refuge