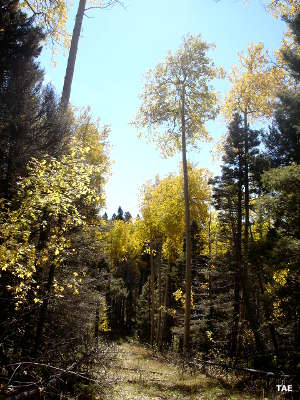 The 100,000-acre Valle Vidal Unit was "donated" by Pennzoil Corporation (seems they had an IRS problem) to the people of the United States through the US Forest Service in 1982. This prime piece of real estate was once a private playground for Herbert Hoover, Douglas Fairbanks, Mary Pickford, and Cecil B. DeMille.

Valle Vidal has two campgrounds and numerous parking areas for those heading into the back country. In addition to trout streams throughout the unit there are several fishing ponds, including one set aside solely for children.

Carson National Forest includes some 86,193 acres of wilderness and proposed wilderness. In wilderness areas, foot and horseback travel is allowed but no mechanized equipment (not even mountain bikes or hang gliders).

Carson National Forest has 400 miles of mountain streams and many lakes, most of which are stocked with native trout by the New Mexico Department of Game and Fish. In addition to the mule deer, antelope, elk, mountain lion, black bear and bighorn sheep, the Forest is inhabited by many species of smaller animals, songbirds and raptors (red-tail hawks, falcons and bald eagles).

With more than 330 miles of trails and forest service roads, there's lots of opportunity for hiking, mountain biking, horseback riding and 4-wheel exploring. In the winter time, most of these same trails and roads become excellent snowmobile and cross-country ski trails.

The list below is of developed campgrounds within Carson National Forest. A lot of them are managed by private concessionaires who charge fees for their maintenance and management. However, while some restrictions apply, we can camp almost anywhere in the forest. We do have to be careful, though, because many thousands of us humans visiting the forest can cause quite an impact on the land, the vegetation, the streams and ponds, the mountains, and the wildlife. But if we minimize all traces of our visits, that which the forest seeks to preserve will be preserved and future generations will never know we were here.

Camping limit in any one spot is 14 days. Preferred campsites are at least 200 feet from any water source, have a spot for a tent that doesn't destroy any vegetation (better yet: try a hammock with a tarp instead of a tent), and is out of sight of a trail (unless it is a designated campsite). You might also wear sneakers or light shoes to avoid trampling the vegetation. Instead of a campfire, try using a portable stove (it leaves no unsightly scars on the landscape and never burns out of control). If you must have a fire: keep it small and use only fallen, dead wood. You don't need a fire ring but you do want to clear away anything burnable for several feet around your fire. Never leave your fire unattended and make sure it's not just dead out when you leave but make all trace of it disappear.

The closer you get to the source of the water, the cleaner and purer it will be. That said, giardia lambia and other water-borne parasites are still present in places in the forest and you never know... you'll probably want to filter or treat all your drinking water. But if you happen to get lost and are in trouble with no water, drink from a free flowing stream: far too many lost folks are found dead next to streams that have perfectly good water, killed by the propaganda that says EVERY STREAM... it's not true. A few years ago a Forest Ranger went around testing stream water all over the Rockies and his published report stated there are more giardia cysts in Denver city tap water than in most streams he tested (the cysts are extremely durable but it takes a particular threshold amount of them in your system to make you sick). Again, the closer you are to the source of flowing water, the cleaner and purer the water will be.

For your feces, dig a hole 5-6 inches deep into the soil humus and bury everything when you are done. Be at least 200 feet from any water. Don't leave any trash anywhere: pack it in, pack it out.

The list of hiking trails below is not nearly all the trails that are available in Carson National Forest. This list is just meant to be a representative sample. On the Forest, there is everything from your veritable "walk in the park" to trails that come complete with multiple switchbacks and climbs that could easily leave you breathless, at least until you get to the top and see the view that really takes your breath away...