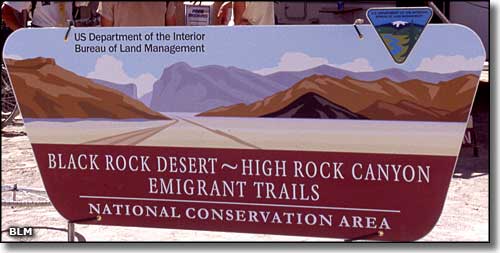 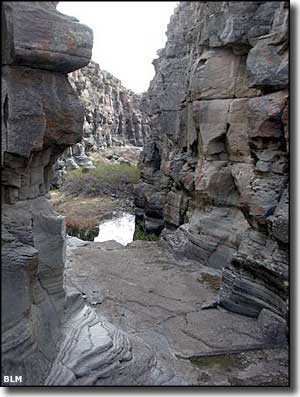 The Black Rock Desert-High Rock Canyon Emigrant Trails National Conservation Area is a huge chunk of land in northwestern Nevada. The playa of the Black Rock Desert itself is the dry lake bed of ancient Lake Lahontan, a huge lake that formed as the glaciers melted, then dried up after the last Ice Age. The famous "black rock" in the area is lava spewed out of the ground by an ancient volcanic "hot spot" that slowly moved this way from the Columbia River basin area. The "Emigrant Trails" part of the name comes from the trails followed by thousands of California and Oregon-bound emigrants who traveled through this incredible area during the mid and late 1800's. The main trails were the Nobles Trail and the Applegate-Lassen Trail.

The playa has been used for all kinds of things over the years: setting world speed records for motor-driven and human-driven vehicles, amateur rocket launches, sand/wind-sailing, etc., but is probably most famous these days as the home in late August-early September of the temporary Black Rock City, site of the Burning Man Festival.

There are roads (usually high-clearance, often 4WD) all through the NCA, separating the various wilderness areas from each other and allowing access to the mines and many pieces of private land scattered throughout the region. There are primitive campsites scattered all along these roads, at the ends of the roads and close to the three major hot springs in the area (Trego, Double Hot and Black Rock). There are many dispersed campsites along the fringes of the playa and at Flowing Wells and Cassidy Mine (between the playa and Soldier Meadows Road).

Camping in High Rock Canyon and Soldier Meadows is limited to designated sites to reduce the impact on nesting raptors and on California bighorn sheep that inhabit the area. The road through High Rock Canyon is usually closed from February 1 to the middle of May.

An interesting addition to the usual sparse BLM facilities is the presence of old pioneer cabins in various places on the NCA. Most of these cabins are available for public use on a first come, first served basis but they tend to be full during most of the active season out here. A couple of them have running water (but expect to treat it before drinking it). The cabin at Massacre Ranch even has lights and electrical outlets, but you'll need to plug in a generator to make them work.

The stay limit is 14 days, then you are required to strike camp and move at least 25 miles away from the site before setting up camp again.

On the north side of the NCA, east of the Summit Lake Indian Reservation, is the Lahontan Cutthroat Trout Natural Area: an area set aside to preserve and protect an unaltered population of Lahontan Cutthroat trout. There are primitive campsites all through the area and along the roads. You'll find wild horses, pronghorn antelope, bighorn sheep and mule deer in the aspen-filled canyons along the many cool streams, but fishing in the streams and at Summit Lake is not allowed.

Most folks access the Black Rock Desert-High Rock Canyon Emigrant Trails National Conservation Area via State Highway 447, north from Fernley on the I-80, through Wadsworth, Empire and Gerlach.