Years ago, Boyer Chute was a channel of water flowing on the east side of the Missouri River, along the western boundary of Iowa. Between 1820 and 1937, the main channel of the Missouri moved three miles to the east and Boyer Chute is now on the west side of the river in Nebraska. The Army Corps of Engineers began dredging work on the Missouri in 1937, seeking to deal with flood control issues and to improve navigation on the river. That effort on the part of the Corps of Engineers led to the loss of more than 500,000 acres of wildlife habitat along the navigable section of the Missouri River floodplain: they made Boyer Chute essentially a cut-off oxbow of the river and without a regular flow-through of river water, a forest took hold.

The area was neglected for many years, until restoration work began in 1993 (which led to establishment of the National Wildlife Refuge in 1996). Water flow from the main channel of the Missouri was restored, then some 9,100 native plants and trees were planted. Historically, the area was a mix of riparian forest and vast grasslands. The effort was to return the property to that state.

Today, the 3,350-acre property is home to numerous white-tailed deer, beavers, raccoons, bobcats, opossums, coyotes and foxes. As more and more sport fish moved into the formerly murky waters, herons, ducks, geese, hawks, belted kingfishers and bald eagles returned to the area. The spring and fall migration seasons see large flocks of migratory waterfowl pass through, stopping to rest and feed for a couple days before continuing on their paths.

There are a number of hiking trails on the refuge. There is also a concrete footbridge that crosses the chute itself and connects the mainland to an island on the edge of the river. Water flow in the chute drops off in the late fall and winter months as water flow in the Missouri itself drops off. Hunting (subject to Nebraska and US Fish & Wildlife Service regulations) is allowed in season with a permit (of course). The refuge also offers several fishing piers along the chute. The property is day-use only (no camping, no campfires, no pets) and charges no fees for entry.

To get there: Turn east off US Highway 75 at Madison Street in Fort Calhoun (at the very south end of town) and follow the signs along County Road 34 for thee miles to the entry gate. 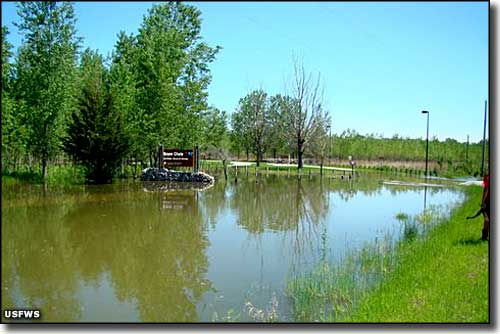 Boyer Chute NWR in May, 2011: River flooding closed the property 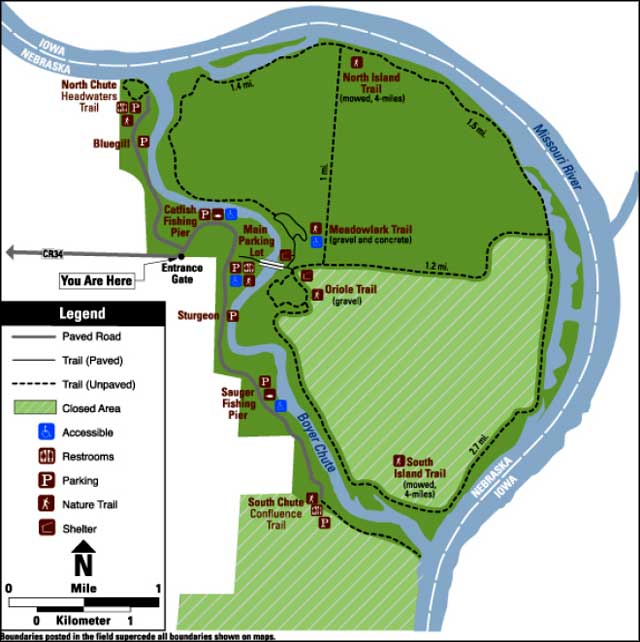