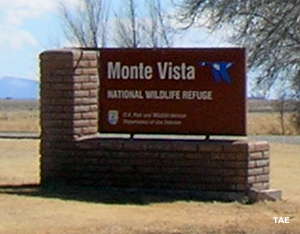 Monte Vista National Wildlife Refuge was established by the Migratory Bird Conservation Commission in 1953 to provide a much needed habitat for wildlife, particularly waterfowl, in the San Luis Valley. The Monte Vista NWR's 14,189 acres of man-made wetlands is intensively managed to provide habitat for a wide variety of waterfowl and other water birds. Using numerous dikes and other water control structures, a patchwork of diverse wetland habitats has been created, ranging from shallow wet meadows to large expanses of open water. Artesian wells, pumped wells and irrigation canals, some dating to the Valley's “ditch boom” of the 1880's, supply much-needed water. Other land/water management tools such as grazing, mowing, prescribed burning and farming are also used to ensure that refuge lands provide the necessary food, cover and nesting habitat for waterfowl and other water birds. 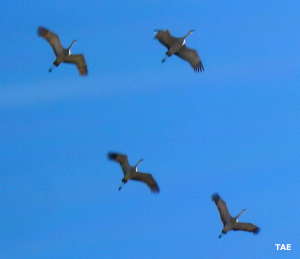 Mallards, pintail, teal, Canada geese, avocets, killdeer, and ibis are common, as are egrets and herons. The refuge is also a major layover place for migrating greater sandhill cranes when they move between their summer breeding grounds in the northern United States and southern Canada and their wintering area around Bosque del Apache National Wildlife Refuge in New Mexico. Up to 20,000 cranes will pass through in the spring and again in the fall. Sometimes you can see the three remaining endangered whooping cranes from a failed attempt to establish a wild migratory population in the 1980's migrating with their foster species: the sandhill cranes.

A herd of elk began using the refuge in the 1980's. These days, several hundred elk may be found on the refuge looking for fall sanctuary from the hunting pressure on other nearby public lands and winter food.

In the San Luis Valley, wetlands and high altitude desert exist side by side. In this unique environment, Monte Vista National Wildlife Refuge ensures a continuing place for wildlife.

Monte Vista NWR is located 6 miles south of Monte Vista on State Highway 15. The wildlife can be observed from the county roads that ring the property and from a 4-mile long auto tour route that begins near the refuge headquarters.

Flights of sandhill cranes during the spring migration

Sandhill cranes on the ground, Mount Blanca in the background 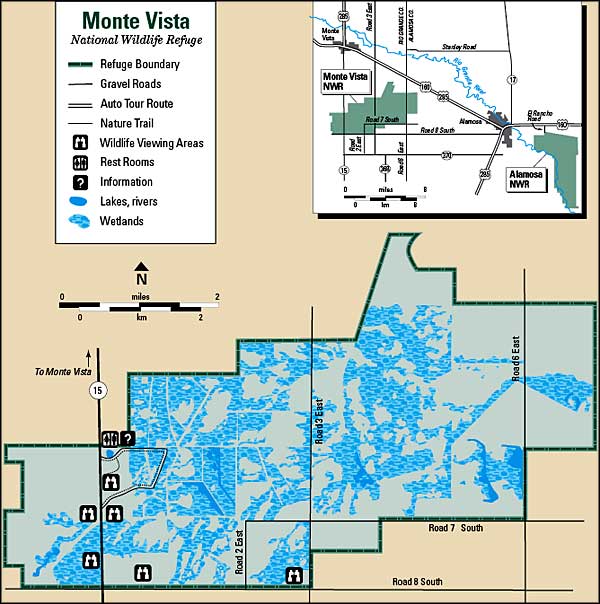