Petrified Forest National Park was designated to preserve and protect one of the largest natural collections of petrified wood on Earth. This is an almost barren (but still quite beautiful) area north of the Mogollon Rim and south of Interstate 40. There's petrified wood everywhere but the most prominent collection is in the "Big Logs" area. That's also where the Rainbow Visitor Center is.

But Petrified Forest National Park isn't just about the petrified wood everywhere, it's also about the incredible geological formations and how they have eroded. It's about the fossils, the agate, the ancient Anasazi pueblos and the Painted Desert. Most of the park is easily explored in a good day, except for the Painted Desert Wilderness Area (more than 52,000 acres of wild and woolly countryside at the north end of the National Park). That's probably why this is primarily a day-use only park. The gates open at 7:00 AM and close at sunset. The only place inside those gates where overnight parking is allowed is in the parking areas where you find trails leading into the Painted Desert Wilderness, because that's the only area where camping is allowed. And to go into that wilderness for the night you need to stop by one of the visitor centers, register and get a free camping pass first (be there at least one hour before the visitor center closes, too).

When I went to Petrified Forest National Park, I entered from the south gate and passed through the Big Logs area, then the Crystal Forest, Jasper Forest and Agate Bridge. Sooner or later I'll get some time to come back into this page and put some photos from those areas in. I got enough photos that I could do several photo galleries easily...

One popular area in the park that sees a lot of foot travel is Blue Mesa. This is an area where you can enjoy a leisurely drive on a 3-mile loop road and catch the views: plenty of pullouts, parking and overlooks. What you'll be seeing is a view of the heavily eroded badlands up to 250 million years after the materials were first deposited under the ancient seas. The colors tend to the purple, red, blue and brown but everything is in layers. The petrified wood is a relatively recent phenomenon and comes from the upper layers, but it falls downhill and gets mixed in after the softer layers beneath it get washed away.

Near the Blue Mesa Overlook is a trail that leads down into one of the canyons, so you can get real close and personal with the formations. Going down isn't bad, the climb back up is reasonably steep and this is all at elevation: you want to be in reasonably good health and ready for a climb. You'll also want plenty of water, especially if you're here in the summer. But it's a great hike and there are interpretive plaques all through the area. 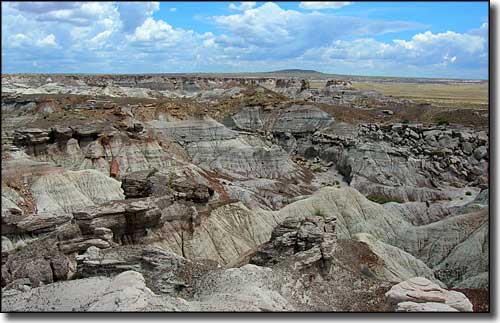 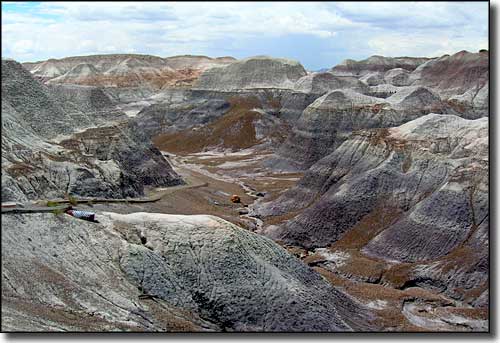 Looking down into Blue Mesa Canyon 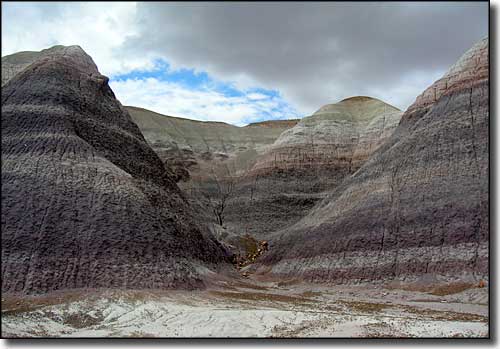 Down in Blue Mesa Canyon 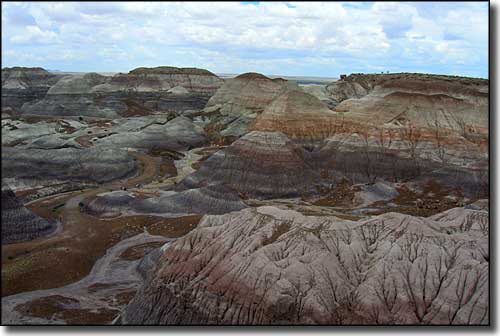 The view from Blue Mesa Overlook

After huffing and puffing my way back up out of Blue Mesa Canyon, I continued to the north and came to the Teepees area. These are several mounds of materials that were buried deeper beneath those ancient oceans and, while still layered, they tend more to the red and gray side of things. Further north from the Teepees you'll cross the Rio Puerco and beside that large and usually dry wash are the remains of an ancient Anasazi pueblo. I stopped and took the short hike, even went down the hill a bit and checked out the petroglyphs. 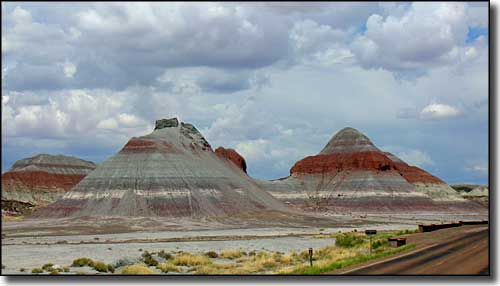 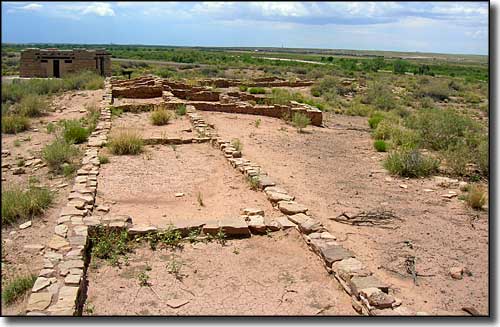 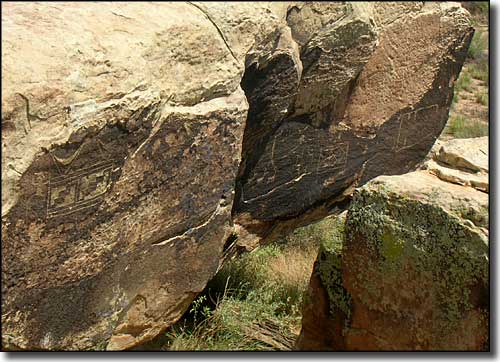 Some petroglyphs just down the hill from the Ancestral Puebloan ruins

I exited Petrified Forest National Park at the northern entrance but first I had to cross the bridge over Interstate 40 and check out all the overlooks of the Painted Desert area. 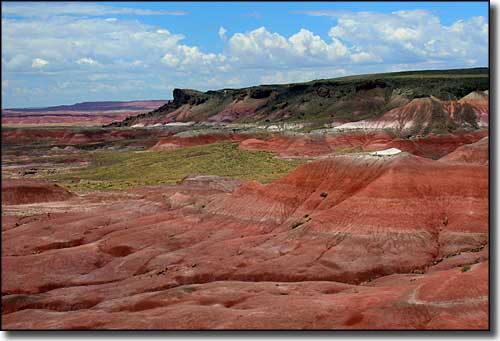 Looking north into the Painted Desert 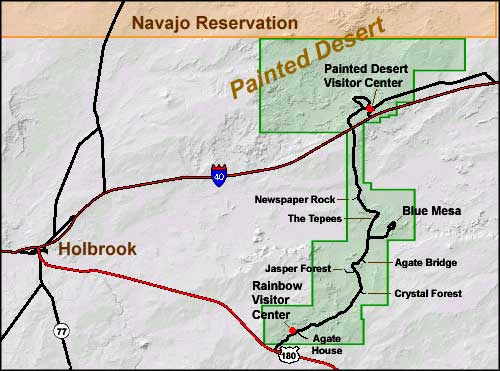