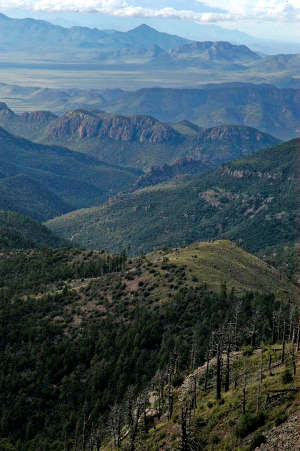 The Peloncillo Mountains Wilderness is a 19,440-acre property in southeastern Arizona, partly against the New Mexico border. In the mid-1800's, the famous Butterfield Overland Stage Route ran around the southern boundary of the Peloncillo Mountains Wilderness. Since those days, though, the area has become more the province of large cattle ranches and property owners who keep all the gates locked, including those that cross public roads leading to public property.

The Peloncillos were created by violent volcanic upheavals and the mountains are a veritable maze of basalt ridges separating a labyrinth of twisted and contorted canyons. Elevations vary between about 4,000 feet and 6,401 feet. If you don't want to explore the canyon bottoms, you'll want to get up high and enjoy the expansive views.

Most of the Peloncillos are vegetated with a thick chaparral of mesquite, catclaw, creosote bush, turpentine bush, snakeweed, burroweed, agave, whitethorn, prickly pear and juniper. Desert bighorn sheep have been successfully reintroduced to the mountains. You might also see mule deer, bobcat, mountain lion, black bear, coyote, fox and other small mammals in addition to the usual assortment of reptiles, insects and arachnids Arizona is so famous for. 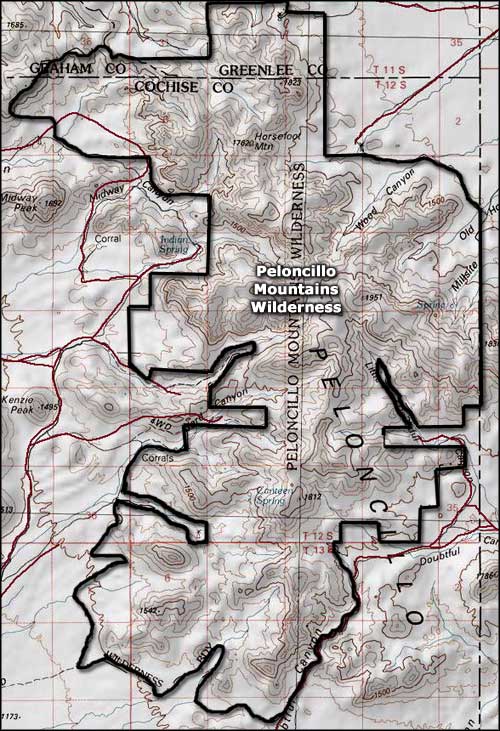