A view across the Grand Canyon from the South Rim 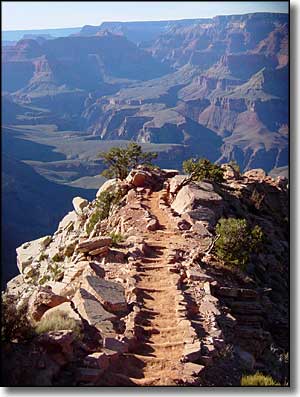 The Grand Canyon was carved into the rock of the Colorado Plateau by the Colorado River. Geologists figure the river settled into its present course about 17 million years ago and what we see today has been eroded away in that time span. What is exposed here is almost 2 billion years of geological history. Because of that water erosion and the nature of the rock that makes up the walls of the canyon, this is extremely steep and rugged country. There are areas where foot trails and back country roads have made some amount of ingress to the property but the hand of man is almost invisible on the scale of the Grand Canyon.

The canyon is about 277 miles long and varies in width from 4 miles to 18 miles. In most places the depth is more than one mile. At the bottom of everything is the Colorado River. As the canyon is cut into the slanted uplift of the Kaibab Plateau, the North Rim is about 1,000 feet higher than the South Rim. Because of the general north/south sloping trend of the plateau, surface water from the North Rim area flows into the canyon. Surface water from the South Rim area doesn't, flowing to the south along the general lay of the land. That makes the northern canyon drainages deeper and longer while the southern canyon drainages are shorter and steeper. Near the very bottom of the canyon is the "Great Unconformity": an area where about 1 billion years of rock deposition is missing. Sandstones that are about 500 million years old are lying directly on top of the Vishnu Schist, a zone of igneous rock put in place about 1.5 billion years ago. That indicates there was a long period of build up and subsequent erosion between the two presently extant layers of rock. The youngest rock in the canyon is the result of volcanic activities about one million years ago. 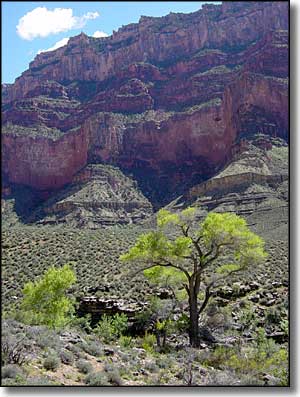 Most visitors to the canyon go to the South Rim where the elevations are lower, the temperatures hotter and the views smaller. But they go there because access is somewhat easier. To get a real feel for how big the canyon is, you need to go to the North Rim and check out the view. Because the canyon walls are not as steep, there are more trails along the North Rim, too. The only problem with the North Rim is the road is usually closed by snowfall from late November to early May.

It is possible to descend into the canyon, cross the Colorado River and reascend on the opposite rim in only a few days but you want to be very physically fit and carry plenty of food and water. Temperatures between the rims and the bottom will vary as much as 60°F. For folks who do this, there is a shuttle bus that runs daily between the North and South Rims in the summer and fall.

The Hopi, Navajo, Kaibab Paiute, Zuni, Supai, White Mesa Ute and others consider the Grand Canyon to be a sacred place. The first Europeans to view the property were with Captain Garcia Lopez de Cardenas in 1540. That expedition was led to the South Rim by a few Hopi but weren't given any assistance in climbing down. As a result, two of the Spaniards got partway down but turned back when they ran out of water. The next Europeans to visit the canyon were with the Dominguez-Escalante Expedition in 1776. They traveled around the northern end of the canyon (Marble Canyon, Glen Canyon area) before finally finding a way to cross the Colorado and get further west on their quest to find a new route from Santa Fe, New Mexico to Monterey, California. That same year a Franciscan missionary named Fray Francisco Garces spent a week near Havasupai trying to convert a few members of the Havasupai tribe, but he quickly failed and retreated back to New Spain. 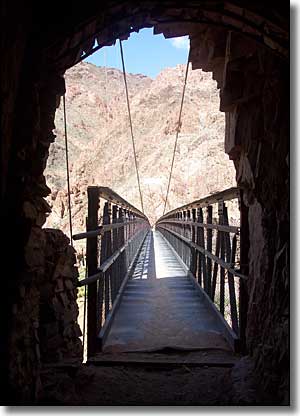 Some contend that the first Anglo-Americans to reach the canyon were mountain men and fur trappers traveling with James Ohio Pattie in 1826 but no one knows for sure. Jacob Hamblin, a Mormon missionary, came into the area in the 1850's, looking for trails and river fords so that Mormon pioneers could more easily travel south into Arizona and set up colonies. The 1850's saw a number of other explorers in the area, too. John Wesley Powell didn't make his famous raft trip through the canyon until 1869.

President Theodore Roosevelt established the Grand Canyon Game Preserve on November 28, 1906. He then added more land and redesignated the preserve as a national monument on January 11, 1908. Miners and land claimants then held up the designation as a national park until February 26, 1919 when President Woodrow Wilson finally signed that Act of Congress into law and the Grand Canyon became America's 17th National Park.

A lot of folks these days make their visit to the Grand Canyon by rafting through on the Colorado River. There are several outfitters/concessionaires who offer that trip in packages that vary between 7 and 14 days in length. The most often used put-in site is near Lees Ferry at the northern end of Marble Canyon. The most often used take-out site is near Supai. Very few people make the journey through the lower canyon and on to Lake Mead. 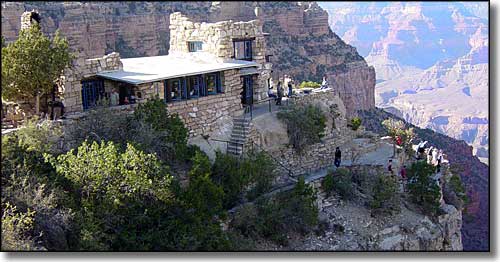 Yavapai Point: one of the National Park Service overlooks

Another view from the South Rim 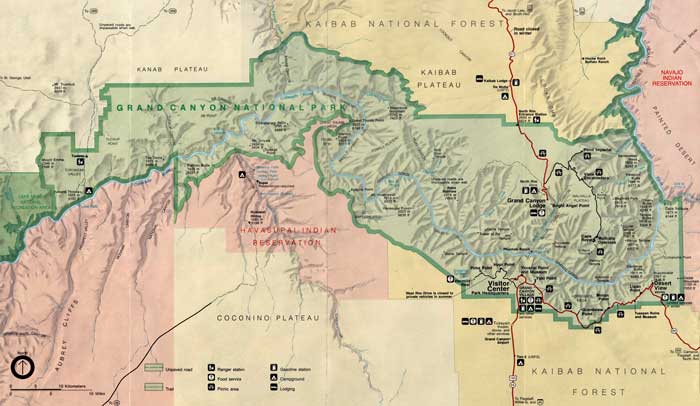