A pair of river otters on Leopold Wetland Management District 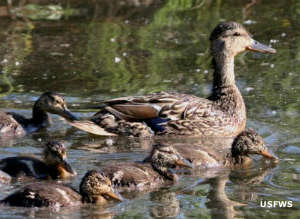 Leopold Wetland Management District is named for Aldo Leopold, a man considered to be the "Father of Wilderness." He's probably best known for his A Sand County Almanac, a compilation of essays he wrote while living on his farm in central Wisconsin. Leopold was a strong advocate for wildlife and wilderness and constantly pushed for more and better efforts to preserve, protect and enhance wildlife habitats for present and future generations.

Within the last 200 years, Wisconsin has lost more than half the native habitat that once made the area a veritable paradise for the Native Americans who lived and died there. Because of the extensive glaciation that occurred from 110,000 years ago to 10,000 years ago, southeastern Wisconsin resembled the prairie pothole region of the north central United States, an area highly productive of waterfowl and other hunting game. The growth in human population has impacted the Wisconsin countryside severely through reducing that habitat by more than 12 million acres.

Hunting (in season and with a valid Wisconsin hunting license) is allowed on 54 of the 56 Waterfowl Productions Areas administered by Leopold WMD. Fishing is allowed, too, but most of the wetlands are too shallow to support fish.