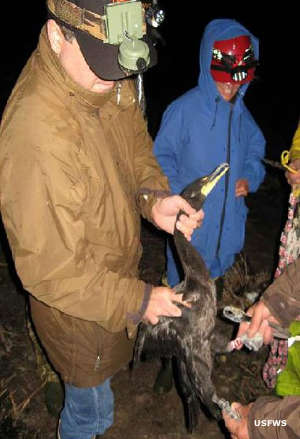 Gravel Island National Wildlife Refuge is a 28-acre property encompassing Spider and Gravel Islands in Lake Michigan, off the coast of Wisconsin. Together with nearby Hog Island (part of Green Bay National Wildlife Refuge), the two islands are part of the Wisconsin Islands Wilderness, one of the ten National Wilderness Areas closed to the public. Gravel and Spider Islands both support large colonies of shorebirds and waterfowl. Spider Island once had a dense forest of cedar, birch and tamarack until the "debris" left by rising bird populations killed off the trees in the 1970's. Today, there are a few remnant tree trunks fallen over on the island but not much else. Gravel Island has always been barren.

Geologically, the two islands are high points along the Niagara Escarpment, an uplift of rock that extends east and west for a total length of about 500 miles. On the eastern side, the escarpment makes Niagara Falls possible, hence the name. The Niagara Escarpment is composed of limestone and in this area off the coast of the Door Peninsula, that limestone has been shaped and molded by pre-glacial rivers and overthrust glaciers until the islands themselves are essentially barren, flat chunks of rock that rise above the lake water only a few feet at most.

A wide range of bird species use the islands for nesting in the summer or for rest and shelter during migration times. There are large colonies of double-breasted cormorants and herring gulls on both islands. Small populations of Canada geese, Mallard and American black duck also exist on Spider Island while Gravel Island has its own colony of Caspian terns.