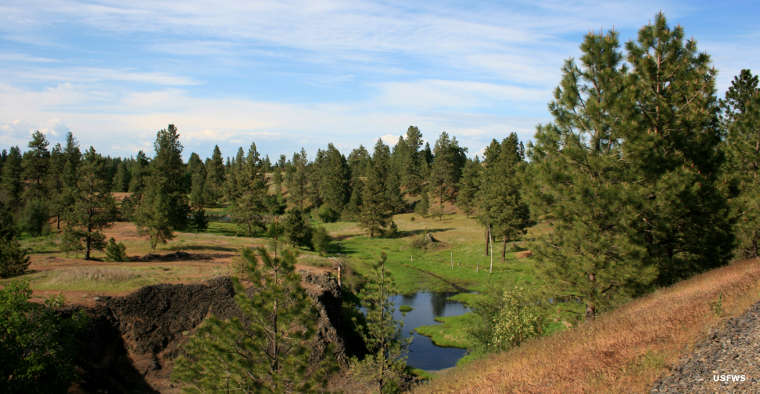 Typical scene in the area of Turnbull National Wildlife Refuge 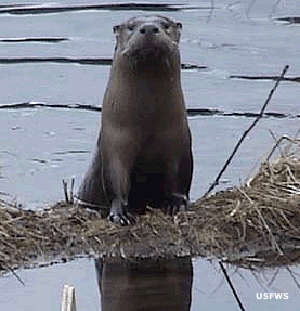 Turnbull National Wildlife Refuge is an 18,217-acre property in the channeled scablands of northeastern Washington. The refuge sits on the edge of the Columbia Plateau, an area formed through volcanic activity that was then shaped by glaciation during the Ice Ages. The "finish" was put on the landscape by intermittent flood waters flowing from ancient Lake Missoula about 16,000 years ago (glacial meltwater at the end of the last Ice Age). The floods were huge (among the largest floods in geological history) and flowed across the countryside cutting rectangular channels, not the usual "V" shaped channels of normal water flows. With meadows, Ponderosa pine forest and assorted wetlands and riparian areas, this is high-quality wildlife habitat in an area surrounded by dry, sagebrush-dotted grasslands. With 3,036 acres of wetlands, Turnbull NWR contains some of the last valuable nesting and resting habitat for migrating waterfowl in eastern Washington.

For many years, management of Turnbull National Wildlife Refuge has been focused on maintaining and improving waterfowl habitat, but that focus has recently been widened to include restoration of more of the native ecosystem processes: wetlands have been restored, native vegetation has been replanted and fire has been brought back into the equation in this fire-dependent ecosystem. There are also two Research Natural Areas established at Turnbull NWR: the 196-acre Turnbull Pines RNA and the 160-acre Pine Creek RNA. Turnbull Pines is composed of what is mostly Ponderosa pine forest with a few scattered wetlands surrounded by aspens in the area immediately surrounding the Turnbull Laboratory for Ecological Studies. Pine Creek is a relatively undisturbed bunchgrass-and-Ponderosa-pine savanna near the eastern boundary of the public use area. 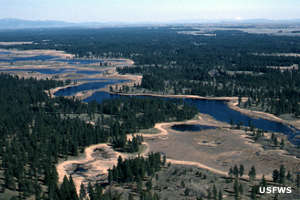 Among the birds who use the refuge are geese, swans, ducks, wading birds, shorebirds, songbirds, hummingbirds and sparrows. Mammals you might come across at Turnbull NWR include elk, coyote, porcupine, badger, beaver, river otter, muskrat, chipmunk, squirrel, small rodents, 12 species of bats, mule deer and white-tailed deer. Water howellia, Spalding's catch fly and bald eagle are three species found on the property that are on the threatened or endangered lists.

For human visitors, Turnbull National Wildlife Refuge offers a 5-mile auto tour route that also gives access to four hiking trails (of which the Pine Lake Loop Trail and Kepple Lake Interpretive Trail are universally accessible). The Kepple Lake Trail leads to an overlook. The Boardwalk Trail leads to an overlook on Blackhorse Lake. The Columbia Plateau Trail is a long-distance trail managed by Washington State Parks. It crosses Turnbull NWR and passes through areas closed to the public. Visitors can hike and ride horses or bicycles along the trail but everything not directly on the trail is closed to all public access. There is also the Kepple Peninsula Interpretive Trail, a 0.44-mile long trail across the four primary habitats that make up Turnbull NWR: Ponderosa pine forest, grasslands, riparian zones and wetlands. Part of the trail is universally accessible. At the end of the trail is a wildlife observation blind and environmental education shelter. The observation blind overlooks a large marshy area very popular among the migratory waterfowl.

To get there: from Cheney, go four miles south from Highway 904 on the Cheney-Plaza Road. There's a large entrance sign at Smith Road: turn there and go east about two miles to the refuge headquarters and public use area. The public use area covers about 3,190 acres and (unusual among National Wildlife Refuges), there is a daily entrance fee charged from March through October - $3 per car, $15 per commercial bus or van with up to 20 passengers and a $25 fee for vehicles with more than 20 passengers. 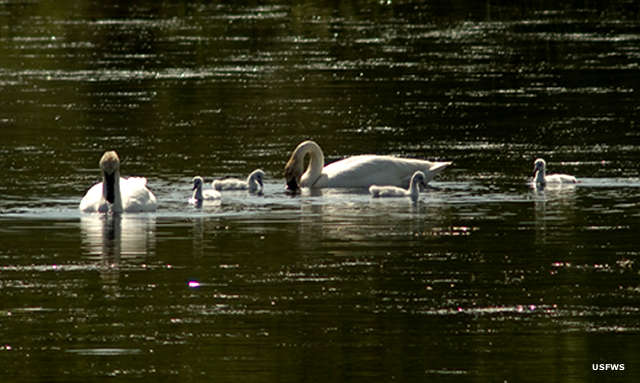 Wetlands area at Turnbull NWR in the fall 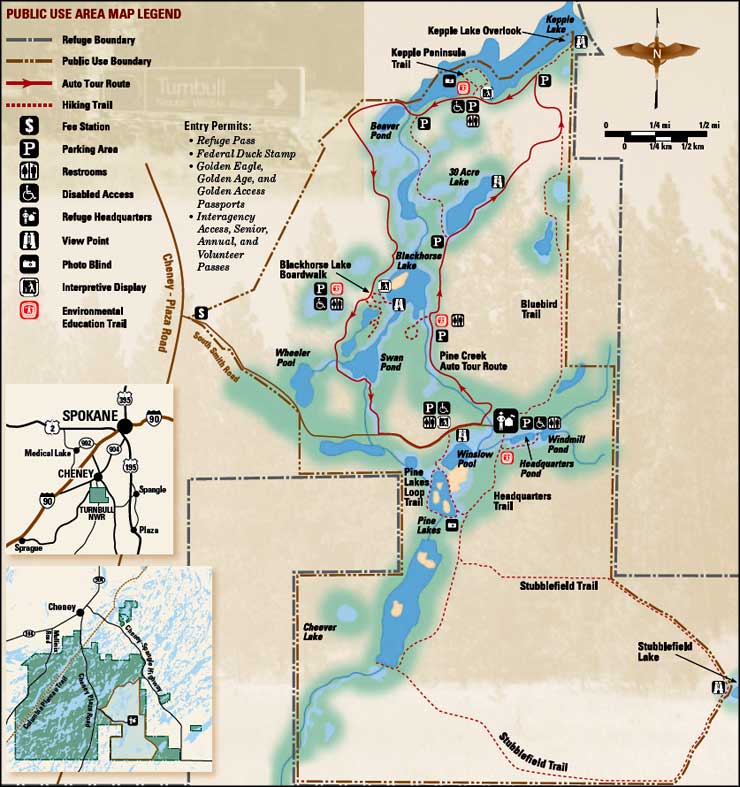