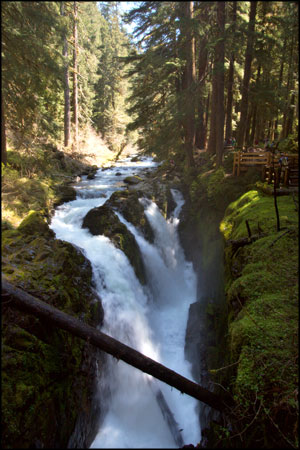 Olympic National Park is a 922,650-acre park mostly in the heart of the Olympic Peninsula in Washington. There's also a thin strand of Park Service property running along the Pacific coastline (up to a few miles wide and 73 miles long).

The coastal portion of Olympic National Park is a strip of rugged, sandy beach together with a strip of neighboring forest. Some stretches of the beach area are clearly wilderness with heavy rock and large boulders for 10 to 20 miles and foot travel can be very difficult. That said, the coastal area sees far more hikers and backpackers than the mountainous interior of the park because that mountainous interior is significantly more difficult to hike. Most folks don't go further than a casual day hike in the main part of the park.

Along the beach is the 9-mile Ozette Loop, probably the most popular section of the entire park. It begins with a trailhead at Ozette Lake that runs 3 miles down to the beach (partly across a wooden boardwalk) through a pristine coastal cedar swamp. Then there's a three-mile hike along the beach (or paralleling the beach, depending on the tide). The three-mile return to the trailhead also involves some hiking on a boardwalk through the coastal cedar swamp.

In the center of the main section of the Park are the Olympic Mountains, a high, rugged, glacier-carved region of steep, heavily forested slopes topped by ancient glaciers. The western faces of the mountains are temperate rainforest while the eastern side is in the rain shadow and significantly drier. The mountains themselves are the product of plate tectonics: they are an example of accretionary wedge uplifting related to the Juan de Fuca subduction zone. Geologically speaking, the mountain rock is a mix of basalt and uplifted compressed oceanic sediments. Mount Olympus (7,965 feet) is the highest point in the range and, due to the elevation and location, is the most glaciated non-volcanic peak in the contiguous 48 states outside of the North Cascades (only Mounts Rainier and Baker have more glaciation). Everything east of there is in the rain shadow and tends to get significantly less precipitation.

The western slopes of the Olympics are covered with a coniferous temperate rainforest that receives an average of 150 inches of precipitation per year. The tree cover is a mix of western hemlock, Sitka spruce, western red cedar and Coast Douglas fir. The understory tends to be a thick growth of mosses, ferns, fungi and shrubs. The eastern slopes are significantly drier and the tree cover is spread out more. The understory not nearly as thick and there is no Sitka spruce. On the northeast side of the park is an area of even drier rain shadow...

There are several roads in Olympic National Park but because of the topography, none go far into the interior. There are more than 600 miles of hiking trails but considering the size, topography and relative remoteness of anything in the interior of the park, most folks will need more than a weekend to really explore anything. And with all the stories of heavy, never-ending rain, July, August and September often have long dry spells. Most folks who do some hiking in the Park do it along the coastal section. However, that has its challenges, too: in the narrowest parts of the beaches the high tide often reaches the cliffs behind the beach and forces people to struggle over several promontories on steep muddy trails with fixed ropes. Overuse does threaten some areas of the park and wilderness camping permits are required for all overnight hikes. Advance reservations are required in some areas.

Hurricane Ridge is a popular destination on the park and the Hurricane Ridge Ski and Snowboard Area offers alpine and Nordic skiing in winter. The Hurricane Ridge Visitor Center is open year round and some truly spectacular views can be had from the nearby viewpoint. The Visitor Center has an information desk, restrooms, gift shop, park exhibits and a snack bar. The road west of the Visitor Center offers trail heads and accessible picnic areas with restrooms and drinking water nearby. The Hurricane Hill Trail is a paved, universally-accessible 1.6-mile trail that is probably the most used trail in the main part of the park, even though the elevation gain on the trail is around 700 feet. Several dirt trails of varying distances and difficulty branch off of the Hurricane Hill Trail.

Olympic National Park is open 24/7/365 but some facilities have more limited hours and some close for the winter. There are several visitor centers and contact stations for the park, all open on various schedules usually depending on the season. Some are open year round, some only in summer, Hurricane Ridge is open when the road is clear. Schedules vary widely because of budget cuts imposed by the general Congressional gridlock.

Olympic National Park operates 16 campgrounds with a total of 900 campsites. The vast majority are available first-come, first served. None of the campgrounds offer hook-ups or showers. In addition, because of the Congressionally-caused budget cuts, services change regularly. There have also been weather events that caused damage to roads and facilities and repairs of those damages has been placed on the far back burner. Campsite rentals vary from $10 to $18 per site per night and many areas are not recommended for anything longer than 21 feet.

The Pacific Northwest National Scenic Trail traverses east/west across Olympic National Park with the western terminus of the trail at Cape Alava on the Pacific Coast. 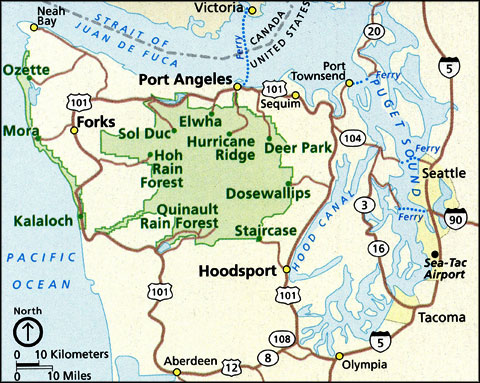