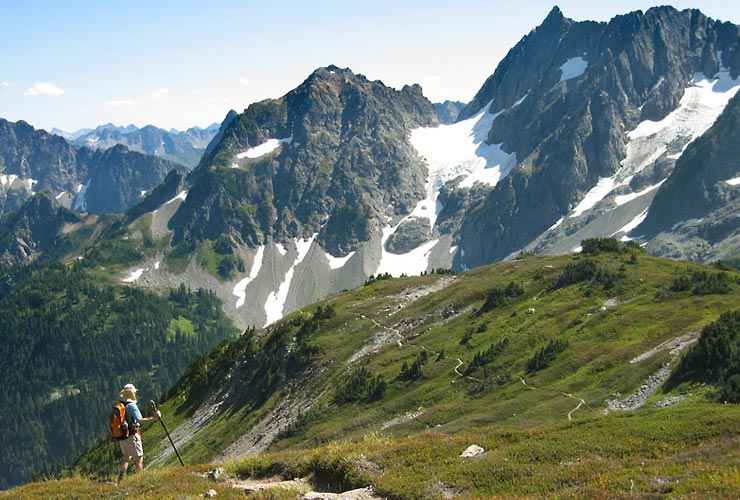 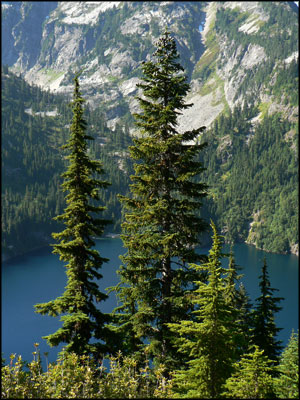 It is estimated that almost half of North Cascades National Park is treed in old growth timber. A major impetus for establishing the park was the protection of that timber: the old growth forest is only there because the landscape is so rugged and sooner or later, the timber companies were going to scar the countryside building roads and removing the valuable trees.

The vast majority of the park (504,614 acres) has been designated as part of the Stephen Mather Wilderness and there are very few maintained buildings or roads within the park boundaries. Most folks who visit come to fish, hunt, hike or climb the mountains. Most visitors arrive in the area via Washington State Route 20, also known as the North Cascades Scenic Highway, a beautiful drive through the mountains that is usually closed in winter because of the massive amounts of snowfall in the area. Heavy rainfall in the area can also cause debris flows and mudslides that block the road.

More than 1,630 species of vascular plants have been identified on North Cascades National Park. Estimates of fungal and non-vascular plants species more than double that. The primary reasons for this massive number of species lie in the extreme variation of rock and soil types, slope, elevation, relative exposure and annual precipitation. The park is also home to 200 species of birds that either breed in the North Cascades or pass through with the seasons. There are also more than 75 species of mammals, including grizzly bear, gray wolf, mountain lion, moose, black-tailed deer, elk, lynx, black bear, pine marten, coyote and wolverine.

There are about 400 miles of hiking trail in North Cascades National Park. Because the countryside is so rugged, you'll find that virtually every route from Point A to Point B has several sharp switchbacks in it. Many trails follow the long, forested valley bottoms, then twist and turn back on themselves as they ascend (and descend) the steep passes and ridges. There are more than 127 alpine lakes hidden away in the countryside with more than 300 glaciers clinging to the peaks, spires, horns and ridges above. Folks hike the area year round but the common hiking season runs from April through October, the peak season in the dry spells between mid-June and late September. The higher elevation trails tend to hold snow well into July, sometimes into August. Peak snowfall is November through March. If you're going to be overnight anywhere in the park, you'll need a free backcountry permit in your possession. Backcountry permits are designed to limit the human impact in many areas of the park that tend to become overcrowded and abused and to disperse visitors throughout the park region and spread the impact in a manner that is, hopefully, less damaging to the soils, vegetation and wildlife.