Mount Baker Wilderness is a 119,989-acre property on the slopes of Mount Baker, the third highest peak (10,778 feet) in Washington and one of the most active volcanoes in the Cascades of northern Washington. The volcano has shown signs of life as recently as 1999 and is under constant observation by the Mount Baker Volcano Research Center. There are also 14 glaciers spread around the flanks of the mountain and the total amount of glacier-covered landscape in the area exceeds 10,000 acres. Snowfall in the area often exceeds 50 feet and Mount Baker currently holds the world record for one season (1998-99) with 1,140 inches.

Large vegetation is generally of the Douglas fir, mountain hemlock and western red cedar variety. The subalpine and alpine meadows feature lots of wildflowers, blueberries and huckleberries (in season). Among the mammals found on the property are black bear, mountain goat, black-tailed deer, elk, wolverine, porcupine, gray wolf, coyote and mountain lion. The terrain is rugged with steep slopes and numerous small ridges. Because of the usual heavy snowfall, there are watercourses and drainages everywhere.

There are multiple hiking and climbing trails in Mount Baker Wilderness. Mountain climbers tend to come in the spring and summer, before the glaciers start cracking and opening large crevasses in the fall. Busy weekends can see hundreds of climbers on the mountain, especially on the Heliotrope Ridge Trail. The Pacific Northwest National Scenic Trail also traverses Mount Baker Wilderness east/west on its 1200-mile journey between Glacier National Park and the Pacific Ocean. 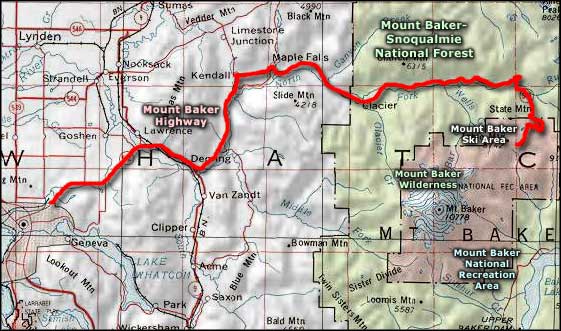