Indian Heaven Wilderness is a 20,960-acre property in the eastern section of Gifford Pinchot National Forest. Mount Adams Wilderness is to the northeast.

Contained within Indian Heaven Wilderness is the Indian Heaven volcanic field, a zone of numerous overlapping shield volcanoes, spatter cones and cinder cones. The highest point on the wilderness is Lemei Rock (5,925 feet) and in its crater is Lake Wapiki. There are about 60 eruptive centers located along the 19-mile-long Indian Heaven fissure.The most recent volcanic activity in the area happened about 8,200 years ago and created the Big Lava Bed.

Because of the relative "youth" of the ground surface, many areas of Indian Heaven Wilderness are sparsely vegetated with lodgepole pine, alder and other pioneer plants. Some areas of the wilderness have no trails (because of the roughness of the lava surface) and route finding can be really hard as local magnetic influences affect compass and GPS performance. Other areas of the plateau are relatively heavily forested with open meadows and some 150 lakes, ponds and marshes scattered around. Because of all the surface water, bug season can be pretty nasty without industrial strength bug repellent. The wilderness is famous for the productivity of its large huckleberry patches (picking season is mid-August to early September).

The Pacific Crest National Scenic Trail crosses Indian Heaven Wilderness for about 16.4 miles and offers spectacular views of Mount Adams, Mount Hood, Mount Rainier and Mount St. Helens along the way. There are several side trails off the PCT to some of the larger lakes and to the Indian Racetrack, a 2,000-foot-long meadow where Native Americans once held horse races.

One thing to keep in mind: local Native American tribes have been using this property for sacred and cultural purposes for at least 9,000 years. You might want to tread lightly... 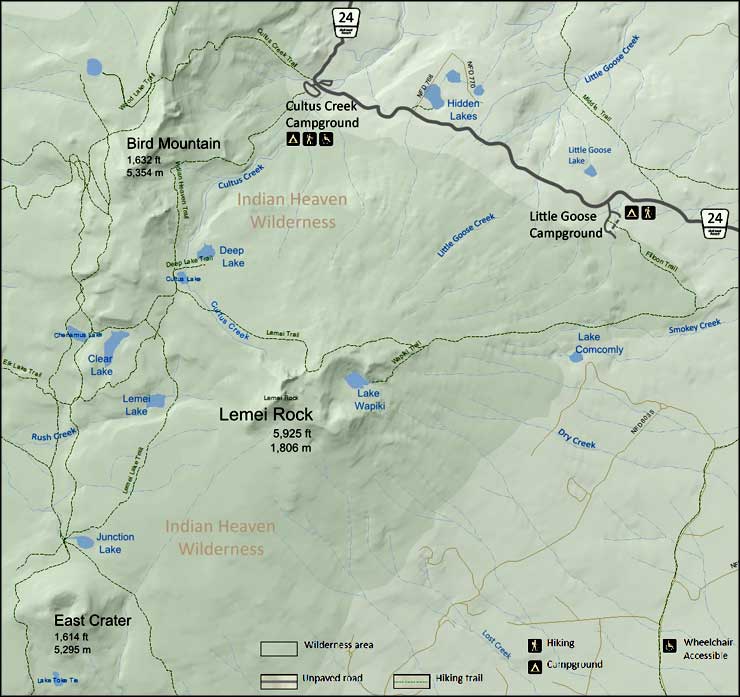