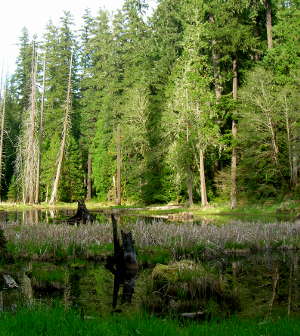 Gifford Pinchot National Forest is stretched out along the western slopes of the Cascades from the Columbia River north to Mount Rainier National Park. Elevations range from about 400 feet to the summit of Mount Adams at 12,276 feet, second highest point in Washington.

There are more than 50 developed campgrounds on Gifford Pinchot National Forest. Most campsites are available only on a first-come, first-served basis but virtually all of the group campsites require advance reservations. Many campgrounds offer spots designed to accommodate truck campers, camp trailers and RVs but sometimes sizes are limited and never are there hookups available. Generally, a developed campsite includes a picnic table and cook grill (sometimes a fire ring) with a drinking water supply and restrooms (often vault or pit toilets) nearby.

There are more than 100 lakes and 1,360 miles of streams on Gifford Pinchot National Forest. More than 90% of the streams have self-sustaining fisheries that include steelhead trout, chinook and coho salmon, kokanee salmon, rainbow trout, brown trout, cutthroat trout, bull trout and eastern brook trout. The Washington Department of Fish and Wildlife does supplement fish populations in some streams and forest lakes. The only river currently designated as a Wild and Scenic River is the White Salmon River but the Cispus River, Lewis River and the Clear Fork and Muddy Fork of the Cowlitz River have been recommended for that Wild and Scenic River status.