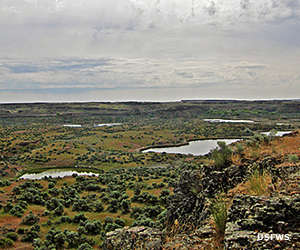 Columbia National Wildlife Refuge is a 29,596-acre property in central Washington. The refuge is a scenic mix of canyons, lakes, rugged cliffs and sagebrush grasslands. Much of the Refuge is classed as "channeled scablands" as a result of the catastrophic draining of ancient Lake Missoula. When the glacial meltwaters of Lake Missoula finally burst through the moraines and flowed toward the Pacific, the water flow in the Columbia National Wildlife Refuge ran about 150 feet high and up to 15 miles wide. That flood continued for years, washing away the topsoil and eroding into the upper layers of basalt, creating flow channels, sharp cliffs and millions of potholes. The landscape is now recognized as the Drumheller Channels National Natural Landmark.

The flood from ancient Lake Missoula ended 10,000 years ago and most of eastern Washington returned to being the desert landscape it was before. Then came the Columbia Basin Project, a project designed to change central and eastern Washington forever by constructing a series of dams and lakes along the Columbia River across the state. Water held back by those dams has seeped far underground and has created multiple wetlands, riparian areas and small lakes across the once dry countryside. Among all the channels eroded into Columbia National Wildlife Refuge, the channel that holds Crab Creek is now a perennial riparian strip. The Columbia Basin Project also provided irrigation water for farmers in the area and the growth of that has brought more migratory wildlife into the area. Sandhill cranes began to stop in in the early 1980's and now the refuge area is a regular stop for the cranes on their way to Alaska and back with the seasons.

Columbia NWR enjoys fairly mild winters and with the larger amount of water and forage in the area, attracts a large number of mallard ducks, Canada geese and tundra swans, in addition to many other migratory waterfowl. In the rain shadow of the Cascades, Columbia NWR receives less than eight inches of precipitation in a normal year.

A view from the overlook at Drumheller Channels National Natural Landmark 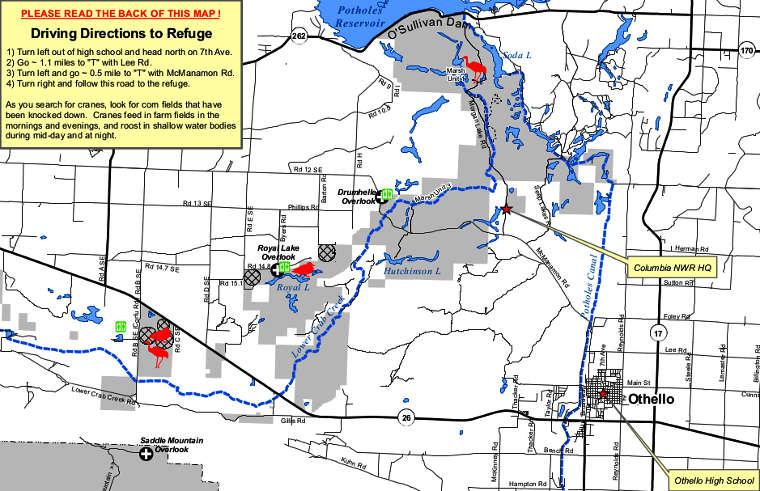