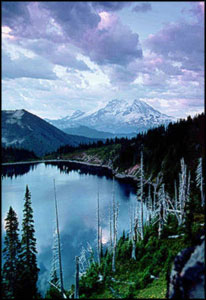 Busiest trail in the area is the Summit Lake Trail, an easy 2.5 mile walk in the woods. Hardest part is the 1,500 feet in elevation gain between the trailhead and the lake itself. Second hardest part is the number of people on the trail: Summit Lake has seen severe human impact, especially on the weekends. 6.5 miles beyond Summit Lake is the summit of Bearhead Mountain (6,089 feet), highest point in the wilderness and offering the best views of Mount Rainier.