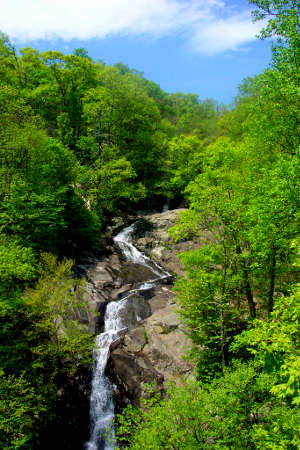 Shenandoah National Park is a 199,100-acre property in a long and narrow piece encompassing part of the Blue Ridge Mountains in western Virginia. The park area runs north/south along the backbone of the Blue Ridge Range, from the Shenandoah Valley on the west to the Virginia Piedmont on the east. The most prominent feature of the park is probably Skyline Drive, a 105-mile drive. About 40% of the park, 79,579 acres, has been designated wilderness. At 4,051 feet, the summit of Hawksbill Mountain is the highest point in the park.

The Blue Ridge Mountains rise more than 3,000 feet above the valleys on the east and west, more than 4,000 feet above sea level. Grenville-age granitic basement rocks are exposed in places in the park, rocks more than one billion years old. In other places there are rocks from the Chilhowee Group exposed, a designation reserved for rocks from the early Cambrian age (545-520 million years ago). Located at the eastern margin of the Appalachian fold-and-thrust belt, rocks in the park were folded, faulted, distorted and metamorphosed during the Alleghenian Orogeny of the late Paleozoic era (325 to 260 million years ago).

A view along Skyline Drive