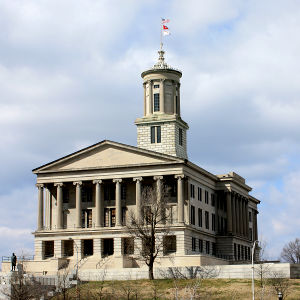 Once upon a time, Tennessee was home to the Archaic people (8,000-1,000 BCE), the Woodland people (1,000 BCE-1,000 CE) and the Mississippian culture (1,000 CE-1,600 CE). The Mississippian people were still living in large towns in western Tennessee when the Spanish arrived in the area. Hernando de Soto came through in 1540, Tristan de Luna in 1559 and Juan Pardo in 1567. The Spanish, though, brought diseases that decimated the native people and by 1600, the Muscogee (Creek) and Yuchi tribes were the major groups of Native Americans in Tennessee. The Chickasaw and Choctaw were in southern Tennessee but when British settlers started arriving en masse in Virginia, population pressures pushed the Cherokee into northeastern Tennessee and that pushed all the other tribes to the south and west. Eventually, eastern Tennessee became the home of what were known as the Overhill Cherokee. Their settlement at Chota (or Echota) was recognized as the de facto capital of the Cherokee Nation for a good part of the 1700's. The state of Tennessee was named for the Cherokee town of Tanasi. In those days, the Cherokee were fierce warriors but were also counted among the Five Civilized Tribes. In those days the Cherokee were also engaged in a long war with the Muscogee Creeks who lived to the west.

The first British settlers moved into northeastern Tennessee in 1757, invited there by the Cherokee at the beginning of the French and Indian War. As the Cherokee had agreed to support the British during the war, the British came to build a fort to protect the Cherokee towns while the warriors were away fighting. It didn't take the British two years to dishonor that agreement and once the tribe realized the situation, it took only a few months for the Cherokee to starve out the British troops stationed at Fort Loudoun.

Euro-American settlers really started moving into Tennessee in the early 1770's. There was a lot of friction with the tribes and when the American Revolution broke out, most tribes allied themselves with the British. Allegiances kept changing back and forth throughout the Revolutionary War, depending on which side the natives considered to be the biggest short term threat. About the same time Lord Cornwallis was surrendering at Yorktown, the Cherokee were splitting into the Overhill Cherokee (at peace with the Americans) and the Chickamauga (at war with the Americans). The Confederation of American States was birthed in the early 1780's with the cessation of hostilities among the Euro-Americans but the Indian wars in Tennessee went on for another ten years. And even once a peace treaty was signed by both the Cherokee and Chickamauga with the US Government, depredations against the Cherokee weren't over. Slowly they signed their land away and most were forced to move south into Georgia. They hardly got settled when many of them were rounded up and marched through horrific conditions to new land in Indian Territory (now the State of Oklahoma, created after the federal government dishonored treaties with tribes they had forced there and took back half the territory to sell to more European invaders). Today, most of the old Cherokee settlements in Tennessee are under water, drowned beneath the reservoirs of the Tennessee Valley Authority. And the Cherokee transplanted to Oklahoma found they are sitting on top of huge reservoirs of crude oil and natural gas...