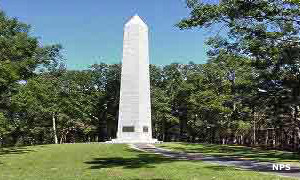 On October 7,1780, an important Revolutionary War battle was fought at Kings Mountain. The Carolinas at that time were pretty evenly split between Patriots and Loyalists. Fully half the battles fought during the Revolutionary War in the Carolinas were Americans fighting Americans. The Battle of Kings Mountain was no different, except the Loyalists lost and surrendered to a smaller Patriot force that materialized almost out of nowhere. Much of that Patriot force was composed of "Overmountain Men," pioneers who'd made the move west of the Appalachian Mountains before the war began. By 1780 they'd halted the British advances west of the Appalachians, they'd forced the Cherokees to retreat from their settlements and they were rallying to help finish off the British in the 13 seaboard colonies. They were crucial to the fight at Kings Mountain and their journey there is marked by the Overmountain Victory National Historic Trail.

After the one-hour battle was finished, the 900-man Patriot contingent took nearly 700 Loyalist troops prisoner and destroyed the left wing of the British Army in the South. The British commander, Major Patrick Ferguson, was killed trying to break through Patriot lines and it was his death that spurred the Loyalists to surrender. Ferguson had been marching his troops through the border area of South and North Carolina, slowly growing his army as more and more Loyalist troops arrived. On October 6, 1780, Ferguson camped his men on the ridge atop Kings Mountain and sent a letter to Cornwallis in Charlotte asking for more men and supplies so he could finally crush all Patriot opposition in the area. The next afternoon Patriot troops surrounded and surprised them and the 65-minute battle was on.

The fighting alternated between Patriot forces scrambling up the mountain under cover of rock and tree, then Loyalist forces charging down the mountain with their bayonets leading the way. Then they'd retreat and the cycle would begin again. There were three charges down the slope before the Patriots succeeded in taking out most of the Loyalist commanders. When Ferguson fell, his troops began to surrender. However, once the battle began there were no Patriot commanders and some Patriot units decided to revenge themselves on the Loyalist troops in the same way British Lieutenant Colonel Banastre Tarleton had previously refused to accept the surrender of Continental troops, ordering his men to keep shooting instead. Shortly, though, order was restored and the battle was over. The Patriots had suffered 29 dead and 58 wounded, the Loyalists 290 dead, 163 wounded and 668 taken prisoner. Almost immediately the prisoners were rounded up, disarmed and the march north begun as the Patriot militias didn't want to be around should Cornwallis arrive with his troops.

The battle marked the turning point in the Campaign in the South. Lord Cornwallis was forced to retreat from Charlotte back to Charleston, South Carolina and General Nathaniel Greene got the chance to reorganize the Continental Army in the South. From that point on the war led almost straight to Cornwallis surrender at Yorktown and the end of the fighting.

The 3,945-acre Kings Mountain National Military Park was established by an act of Congress on March 3, 1931, to commemorate the Battle of Kings Mountain. Today's park offers a 1.5-mile paved trail from the visitor center along the Patriot lines and rises to the crest where the Loyalists were encamped. The trail passes several monuments along the way but was steep in some areas. As part of the Centennial Initiative of the National Park Service, the trail is supposed to be rehabilitated to remove the steepest sections and make the entire route fully accessible.

Kings Mountain National Military Park is primarily a day-use only park with a single campsite available at the end of a 3-mile hike. The park is open for all other activities, including hiking, from 9 am to 5 pm daily, except closed on Martin Luther King Jr. Day, Presidents Day, Columbus Day, Thanksgiving Day, Christmas Day and New Year's Day. There are no fees involved and while use of the campsite requires a free permit, use if first come, first served. Most campers spend their camp time at the adjacent Kings Mountain State Park where there are 116 campsites available.