Cowpens National Battlefield in the fog 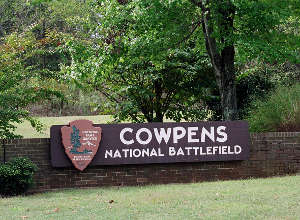 Cowpens is the site at which the Continental army of General Daniel Morgan performed a double envelopment and turned both flanks of Lieutenant Colonel Banastre Tarleton's British army. Looking through the looking glass of history, portions of the battle plan were genius while others developed from a comedy of errors. In the end, the over-aggressive British commander over-reached his abilities and barely escaped with his own life while most of his remaining troops were surrendering to the Continentals. The battle was over in less than an hour, it took longer to bury the dead.

Morgan headed north from there, knowing British General Lord Earl Cornwallis would come after he and his men. They marched the prisoners northeastward to the area of Winchester, Virginia, then went to meet with with General Nathaniel Greene. Morgan shortly resigned his commission, citing reasons of ill health and bouts of rheumatism. Greene assumed command of his and Morgan's armies and led a series of maneuvers that led to the Battle of Guilford Courthouse, a very costly victory for the British (when word got back to England it was said in the House of Commons "Another such victory would ruin the British Army.") The outcome at Guilford Courthouse caused Cornwallis to abandon the Carolinas and head straight to the Battle of Yorktown, which battle effectively ended the war.

The 845-acre Cowpens National Battlefield is open daily, 9 am to 5 pm, except closed on Federal holidays except for Memorial Day, Independence Day, Labor Day and Veterans Day. The park offers a visitor center, battlefield trail and an auto tour route around the perimeter of the battlefield. There is also a picnic area with a covered shelter. The only fees involved revolve around group use of the covered picnic shelter and other special use permits. The park is a day-use only facility.