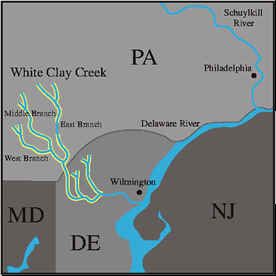 The White Clay Creek watershed is located in southeastern Pennsylvania and northwestern Delaware. The Wild & Scenic River designation arrived in 2000 and covers about 199 miles of the various primary and secondary tributaries of White Clay Creek in both states, virtualy everything above the confluence of the creek with the Christina River about 5 miles southwest of Wilmington at Churchman's Marsh.

Archaeological evidence found in the area suggests it has been inhabited for several thousand years. The confluence of the East and Middle Forks of White Clay Creek was the site of Opasiskunk, a Native American village inhabited from the Archaic Period (8,000 to 2,000 BCE) until the early 1700's. Today, there are more than 200,000 people living in close proximity to White Clay Creek and for many of them, White Clay Creek is their main source of drinking water.