Mead Run, from a trail on Allegheny National Forest 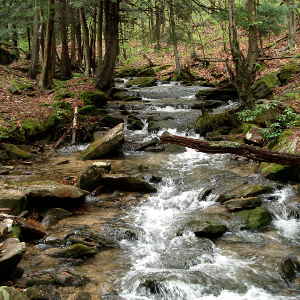 Allegheny National Forest is a 513,15-acre property in northwestern Pennsylvania. The Weeks Act of Congress allowed the Federal Government to buy abandoned land in the eastern states and restore that land to health. As northwestern Pennsylvania had been completely denuded of all virgin forest, Allegheny National Forest was established on previously abandoned land in 1923. For the first couple decades, locals often referred to the Forest as the "Allegheny Brush-patch" because the land had been so depleted they figured nothing would ever grow there again. So like most eastern forests, Allegheny is mostly a second-growth forest. And that second growth is different from the original forest.

When the Europeans first arrived, western Pennsylvania was covered with a thick forest of hemlock and beech. Today's forest is a mix of red maple, cherry, sugar maple and black birch. Because the Forest had previously been clearcut, the trees are all essentially the same age. The way the Forest Service manages this is to regularly clear cut different areas of the Forest, except now it's called "silviculture" instead of "clear-cutting."

All that said, Allegheny does includes thousands of acres of the last remaining old-growth forest in Pennsylvania. On the other hand, when the government bought up the land they only bought the surface rights, not the mineral rights. More than 90% of the subsurface rights are held by private interests. That means there is oil and gas development happening across the Forest.

In the foothills of the Appalachians, elevations on the Forest range from a low around 1,000 feet in the valley bottoms to a high around 2,300 feet on the Allegheny Plateau tops. The Allegheny River crosses the forest and was dammed at Kinzua Dam in 1965 to create Allegheny Reservoir. The Civilian Conservation Corps had built many structures and campgrounds in the Forest previously but construction of the reservoir fueled a massive spike in the construction of recreational services in the newly created Allegheny National Recreation Area.

Hearts Content and Tionesta National Scenic Areas are on the Forest. The Allegheny and Clarion Wild & Scenic Rivers are also on the Forest.

There are hundreds of developed campsites in the forest, most near the Allegheny Reservoir. Dispersed camping is allowed in most areas of Allegheny National Forest except near Allegheny and Tionesta Reservoirs, Jakes Rock, Rimrock, one-quarter-mile on either side of the Allegheny Reservoir Scenic Drive, along the access roads to Jakes Rock and Rimrock, and within 1500 feet of either side of the main channel of Kinzua Creek from Red Bridge upstream to Mead Run and Hearts con tent Scenic Area or Tionesta Research Natural Area.

There are about 200 miles of hiking trails on Allegheny National Forest, including 96 miles of the North Country National Scenic Trail. There are also about 18 miles of interpretive trails anbd about 53 miles of cross-country ski trails on the Forest. The Forest offers about 365 miles of interconnected routes and trails open to snowmobiles. The same routes and trails are available for mountain biking once the snow is gone.