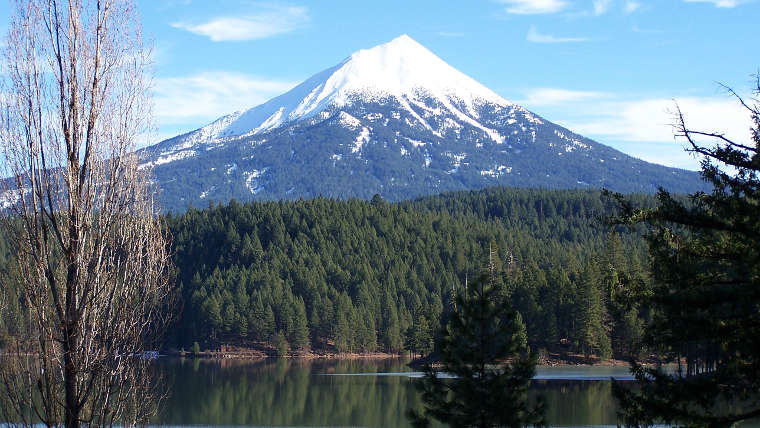 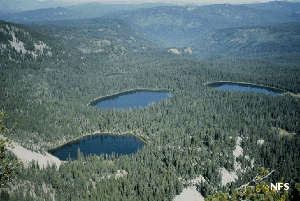 Seven Lakes Basin
from the top of Devil's Peak

Sky Lakes Wilderness is a 116,300-acre property straddling the line between Rogue River-Siskiyou and Fremont-Winema National Forests southwest of Crater Lake National Park. The wilderness is about six miles wide and about 27 miles long, running north-south along the backbone of the southern Cascades. The centerpiece of the region is Mt. McLoughlin (9,495'), a stratovolcano left from the days of regular volcanic activity. Most of the mountain's activities died before the last ice age and the glaciers from those days spilled up against the northern flanks of the mountain but went no further south. The ice at the mountain is estimated to have been 200 to 300 feet thick in order to sculpt the landscape in the way it has. Remnants of that glacier still existed in the early 20th century but it's all gone now. The name of the wilderness reflects the three large glacial lake basins: Sky Lakes, Seven Lakes and Blue Canyon. In all, there are more than 200 lakes on the property and the State of Oregon stocks some of them by helicopter. An EPA study in the 1980's found some of these lakes to be among the most pure on Earth. 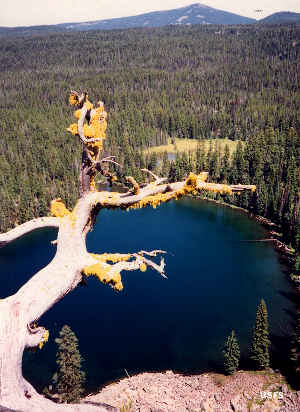 Elevations in Sky Lakes Wilderness range from a low around 3,800 feet to a high of 9,495 feet on top of Mt. McLoughlin. Mt. McLoughlin is the highest mountain in the Cascades between Mount Shasta to the south and Three Sisters to the north. Tree cover is mostly Shasta red fir, Pacific yew, Engelmann spruce, mountain hemlock, lodgepole pine and subalpine fir. The understory is a mix of manzanita, kinnikinnik, heather, huckleberry and snowbrush. The northern third of the wilderness sees herds of elk passing through. The area is also known for pine marten, cougar, coyote, black bear and fisher. The lakes also draw a lot of migratory bird visits in spring and fall. You might also want to know the mosquito hatch is very heavy and runs from snowmelt until late August.

With large broad plateau areas and so many lakes, there are more than 100 miles of hiking trails in the wilderness. The Pacific Crest National Scenic Trail traverses the entire wilderness north-south for a distance of about 35 miles. However, the PCT tends to stay well away from lakes and streams as it keeps to the high country on its journey. The three main lake basins see heavy impact from human visitors in the warmer months as they are prime targets for fishermen who like to camp deep in the woods. The trail to the summit of Mt. McLoughlin is also quite popular but it's a very strenuous day hike. 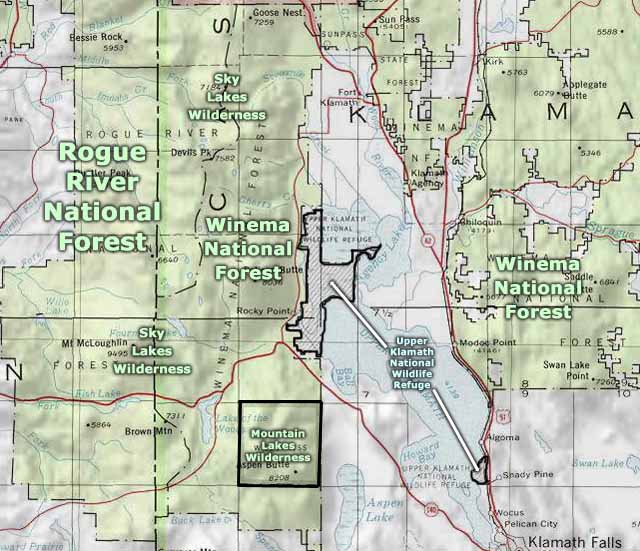