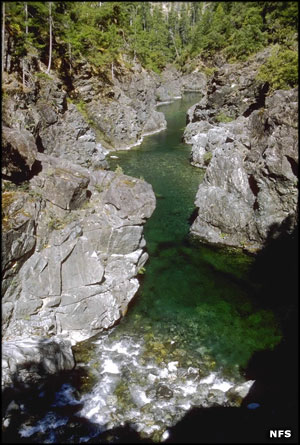 The Rogue River and Siskiyou National Forests were administratively combined in 2004 to make today's 1,723,179-acre Rogue River-Siskiyou National Forest. The majority of the forest is in Oregon but a bit overlaps the border into northern California. Elevations range from just above sea level near the Pacific to a high of 9,495 feet on the summit of Mt. McLoughlin in the Cascades.

Rogue River-Siskiyou National Forest runs from the Oregon/California Coast Ranges to the crest of the Cascade Mountains in southern Oregon. Virtually the entire property is mountainous and forested. The Rogue River, which flows from the Cascades through the Klamath and Oregon Coast Mountains to the Pacific Ocean, is the largest river on the forest, draining about 75% of the forest area. The Illinois River, in the Klamath Mountains, is a major tributary of the Rogue while the Chetco, Pistol, Winchuck, Elk and Sixes Rivers drain from the Coast Range directly into the Pacific. The Upper Rogue, Rogue, North Fork Smith, Illinois, Elk and Chetco Rivers are all designated "Wild and Scenic Rivers."

Mount Emily, site of the first bombing of continental US territory by enemy aircraft, is in the extreme southwest part of the forest - 5 miles inland from the Pacific, 5 miles north of the California state line. This happened after a Japanese submarine surfaced near Cape Blanco, Oregon and launched a small seaplane on September 9, 1942. The seaplane dropped two incendiary bombs on the mountain and succeeded in starting several small fires in the forest. Between alert fire lookouts and unfavorable conditions, the damage was minor. The massive Biscuit Fire in 2002 burned almost 500,000 acres, including a large part of the Kalmiopsis Wilderness.

The forest straddles two distinct geological provinces: the Siskiyou Mountains and the Cascade Range. The Cascades are about 60 million years old and while they usually offer a relatively gentle relief, the Middle Fork of the Rogue and the South Fork of Little Butte Creek have carved themselves some deep and steep canyons in the landscape. The Cascades are forested primarily in Ponderosa pines, Douglas firs and other conifers interspersed with meadows, lakes and meandering streams. 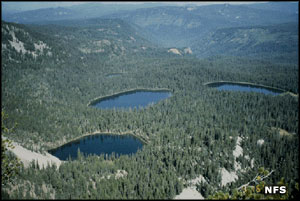 By comparison, the Siskiyou Mountains are a mix of granitic and metamorphosed serpentine rock that varies from 200 million years old to glacial remains only about 50,000 years old. The Coast Ranges are primarily sedimentary rock. The Siskiyou Mountains and Coast Ranges both offer high, steep ridges rising above narrow, deep canyons. The vegetation is a huge mix of plants but a lot of it is in open oak woodlands and dense conifer forests. Between the geological substrate and the climatic changes caused by the varying elevations, the Rogue River-Siskiyou Natonal Forest offers what is arguably the greatest concentration of multiple species and floristic diversity of all the National Forests in the country. There are about 100 sensitive plants found in the Siskiyou's alone... plus 28 different species of conifers. 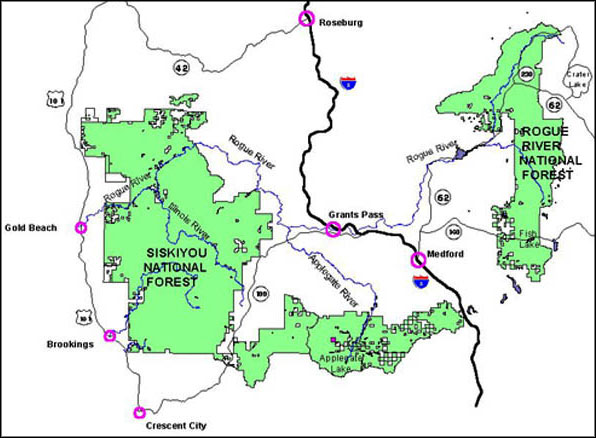 Top photo courtesy of Wikipedia userid Little Mountain 5, CCA-by-SA 3.0 License
Other photos and map courtesy of the US Forest Service