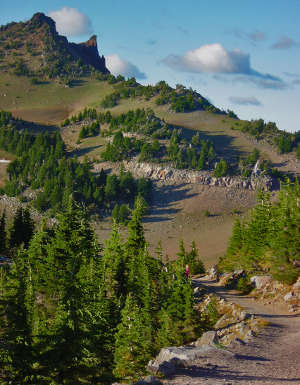 Crater Lake National Park is a 183,224-acre property in the southern Cascade Mountains of Oregon. The lake itself sits in a caldera formed when the cone of Mount Mazama exploded and collapsed about 7,700 years ago. That explosion reduced the height of the stratovolcano by about 1 mile, from more than 12,000 feet to today's rim that is generally between 7,000 and 8,000 feet in elevation. That final eruption has been estimated at being 42 times the size of the Mount St. Helens eruption in 1980. When the major eruption was finished, it is estimated the resulting caldera was about 4,000 feet deep. Over time that depth has filled in with volcanic materials as the mountain still sits on an active upwelling of magma.

Today, the lake is measured at 1,943 deep at its deepest, making it the deepest lake in the United States, second deepest in North America and ninth deepest in the world. No water flows in or out of the lake, it is recharged solely by the precipitation falling inside the caldera rim. A typical winter sees about 44 feet of snow fall on the area so the park itself is ruled by the whims of winter, often from mid-October into the following June. The road to Rim Village is usually plowed but Rim Drive is usually closed until the snow is gone.

Typical of the Cascade Mountain Range, Mount Mazama was a shield volcano among shield volcanoes. It began growing about 400,000 years ago, pushing out lava flows 20-to-30 feet thick. Several shield volcanoes and cinder cones grew in the area. As the lava didn't usually issue from the same mouth again, the mountain built into a complex series of chambers, vents and plugs. However, while Mazama was probably as volcanically active as Mount Shasta to the south, it was broad and short, never the tall, steep stratovolcano Shasta has become. The mountain erupted many times and then went silent about 30,000 years ago. The ice ages came and went, leaving glacial scars in the canyons and valleys around the mountain. Then about 7,500 years ago, the mountain awoke with a bang. It quickly ejected a crater in the northern side of the main summit, sending rock and ash up to 10 miles high in the atmosphere. The eruption ebbed and flowed for the next couple hundred years, then lava flowed out of many fractures ringing the mountain several thousand feet down the slopes from the summit. As that lava flowed out, the summit collapsed and the caldera formed. The mountain ejected massive amounts of ash and that ash was blown up to a thousand miles to the east and northeast. Scientists now use "Mazama Ash"as an element for dating some geological events. The only volcanic activity the mountain has seen since has been limited to inside the caldera.

Crater Lake became the fifth designated National Park in 1902, after 30 years of citizens pushing the government to do something to preserve the area. The first lodge near the lake opened in 1915 and Rim Drive was finished in 1918. The lodge has been expanded since and 40 summer cabins have been built in the Mazama Village complex. Mazama Campground offers 200 sites for tents, trailers and RVs, with flush toilets, running water, picnic tables and fire rings. Lost Creek Campground offers 16 tent-only sites. High season begins in mid-May and ends in early October. Gasoline is available in Mazama Village only from early May to early October. Nearest location of services at other times is about 40 miles away, whether you go northwest or southeast.

Crater Lake from the summit of Mt. Scott 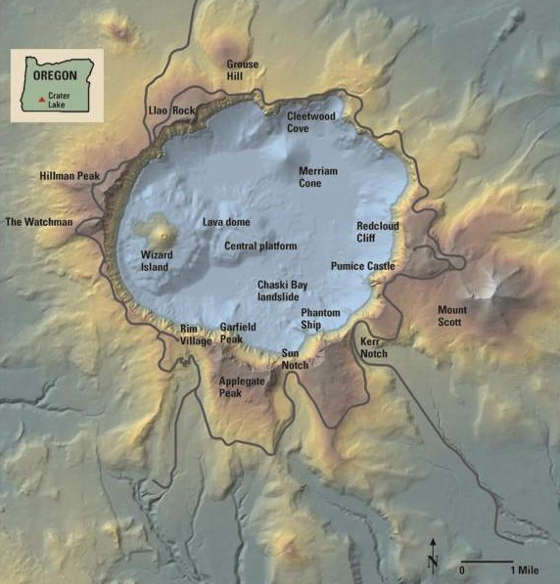