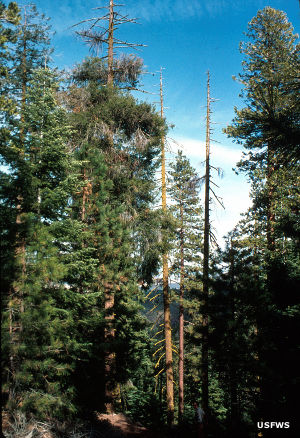 The 4,200-acre Bear Valley National Wildlife Refuge was established in 1978 primarily to protect a night roosting site used by many wintering bald eagles in southern Oregon. The property is mostly forested in Ponderosa pine, Douglas fir, incense cedar and white pine. These are mostly mature trees that offer the open branching pattern much favored by large raptors. As the property is also located mostly on a northeast slope, the roosting birds are protected from the prevailing westerly winter winds. Up to 300 bald eagles have been counted in these trees on a single night.

In the past, poor forest management has contributed to a large buildup of forest fuels in the area. The tree stand is overstocked and ripe for disaster. The US Fish & Wildlife Service has scheduled several commercial timber sales over the next several years to reduce the fuel loading and thin the stand to a more acceptable (and potentially less catastrophic) level.

There are no human-oriented amenities on the property but to get to the viewing area, go to the Keno-Worden Road west of US Highway 97, just south of Worden. Go west until you cross the railroad tracks, then turn left onto a dirt road. Follow the dirt road for 1/2 mile, then park along the shoulder. The property itself is closed to all public entry other than a limited deer hunting season (pre-November 1), but it is possible to catch the bald eagle "flyout" during the winter months (January and February are best). The birds start leaving their roosts about 1/2 hour before sunrise and are most concentrated during that first hour of flight. The viewing spot is just to the east of the main roosting area.