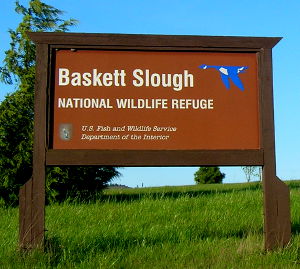 Baskett Slough National Wildlife Refuge is a 2,492-acre property in the Willamette Valley that was established primarily to provide wintering habitat for the Dusky Canada goose. The Dusky Canada goose is different from other Canada geese in that it sticks to limited summer and winter ranges, the winter range being the Willamette Valley of Oregon and the summer range being the Copper River Delta in Alaska. Of the 2,492 acres, about 300 acres is forested, 550 acres is grassland, 500 acres is seasonal wetlands, 1,173 acres is managed croplands and about 35 acres is permanent open water.

The farmed fields, grass fields, rolling oak-covered hills and shallow wetlands of Baskett Slough National Wildlife Refuge are also home to 8 species of amphibians, 10 species of reptiles, 30 species of mammals and many species of migratory birds, including mallards, cinnamon teal and bufflehead and hooded mergansers. There are usually a few great blue herons and other shorebirds visiting for the winter, too. Red-tailed hawks are common in the area and a few bald eagles have taken to wintering on the refuge. The refuge is also home to the largest remaining population of the endangered Fender's blue butterfly, which in turn feeds on the threatened Kincaid's lupine, a plant that lives in the oak savannah habitat at Baskett Slough.

Under cooperative agreements, local farmers farm refuge fields and grow perennial ryegrass, annual ryegrass and fescue, all highly favored by the various species and subspecies of geese that winter in the Willamette Valley. The objective is to reduce the amount of crop depredation in surrounding agricultural areas by providing the birds with such an easy-to-access and plentiful supply of their favorite foods. The fields are managed on a regular rotation of plow, plant and burn so that the geese (and other waterfowl) get maximum benefit from the nutritious grasses. The wetlands are managed as "moist soil units" to promote the growth of millet, smartweed and sedges for waterfowl and other wildlife.

When the geese are in for the winter (October 1 through April 30), virtually all the waterfowl habitat is closed to public entry to allow the birds peace and quiet. In that season, only the overlook kiosk area is open to humans. Keep in mind that the public roads that cross national wildlife refuges come under the jurisdiction of the refuge and are also often closed when the refuge itself is closed. That said, I see conflicting reports that the Baskett Butte trail might be open year round, might be open only during the regular refuge open season and might be open from April 1 through September 30 only. So I dunno...

The information kiosk at the Baskett Slough wildlife overlook

To get there: Baskett Slough National Wildlife Refuge is located on the north side of State Route 22 about 2 miles northwest of the intersection of Highways 22 and 99W, northwest of Rickreall, Oregon. Look for the signs and the wildlife viewing area (with kiosk) at the top of the hill. National Wildlife Refuges are usually day-use only properties and usually open from sunrise to sunset only. There also tend to be no entry fees involved.

Baskett Slough National Wildlife Refuge was named after George Baskett, an early settler in the Willamette Valley, when it was created in 1965. 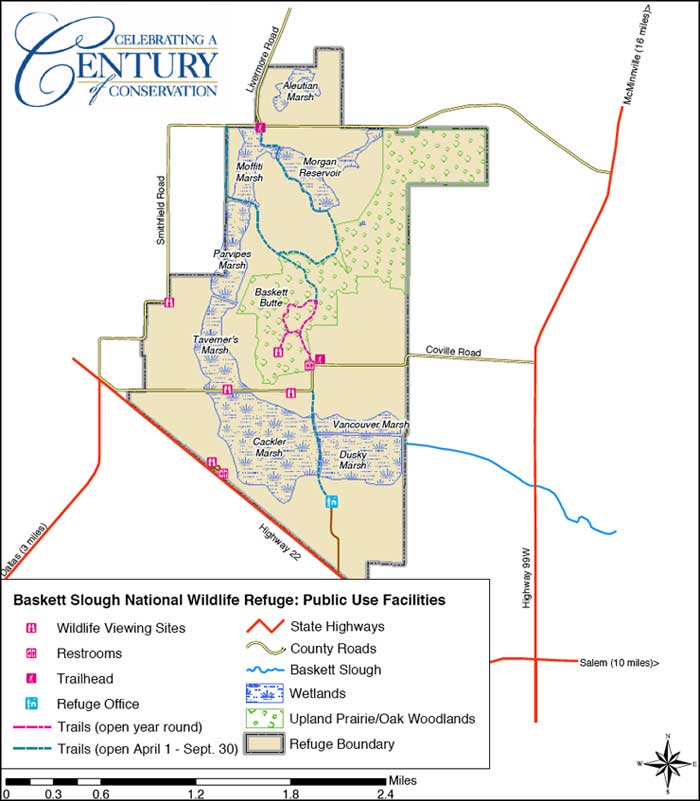