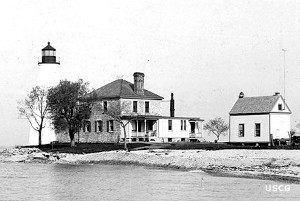 West Sister Island holds a unique spot in American history. The mostly tree-covered, 80-acre island is located in the Western Basin of Lake Erie, about eight miles off-shore. The property is owned jointly by the US Fish & Wildlife Service (the 77 acres of designated wilderness) and the United States Coast Guard (the three acres surrounding the lighthouse and remains of the keeper's house). The island has become a vital nesting and breeding location for many species of birds as on-shore, most of the land has been taken up by people and native habitat has been severely reduced. Because of the need to leave the birds undisturbed, public access is limited to permitted researchers only, and even then, they can access the island only one day per year.

This is the area where Commodore Oliver Perry defeated the British in the Battle of Lake Erie on September 10, 1813. It was after that battle that he sent his famous message to General William Harrison: "We have met the enemy and they are ours."

During Prohibition years, the island had been used by bootleggers making the run across Lake Erie to hide themselves from watching on-shore eyes. Legend has it that the bottom of the lake around West Sister Island is still littered with bottles thrown overboard when the rum-runners were approached by the authorities in those days.

West Sister Island National Wildlife Refuge was established in 1937. Ironically, during World War II, the US Army used the island for artillery target practice. The gunners didn't do much damage to the lighthouse or to the wildlife but they did succeed in destroying the lighthouse keeper's house. The refuge protects what is probably the largest wading bird nesting colony on the Great Lakes. Most of the island was converted to Wilderness status in 1975. The island rookery plays host to multitudes of great egrets, great blue herons, snowy egrets, double-crested cormorants and black-crowned night herons. However, the water around the island is too deep for the wading birds so they have to fly the 18-mile round trip to get food in the mainland marshes for themselves and their young.

Most of the tree cover on the island is composed of tall hackberry trees. The understory is a mix of mushrooms, ferns, wildflowers and great thickets of poison ivy, some of it up to 12 feet tall. Things have been left wild for so long the island has become a veritable jungle. Geologically, the island is composed of glacial fill left on a limestone shelf when the glaciers retreated at the end of the last Ice Age.

US Fish & Wildlife began a pilot program in 1997 designed to create nesting habitat for black-crowned night herons. As part of the program, about one acre of big trees is cut each season. This allows for re-sprouting and growth, slowly creating a shrub layer for black-crowned heron nests. 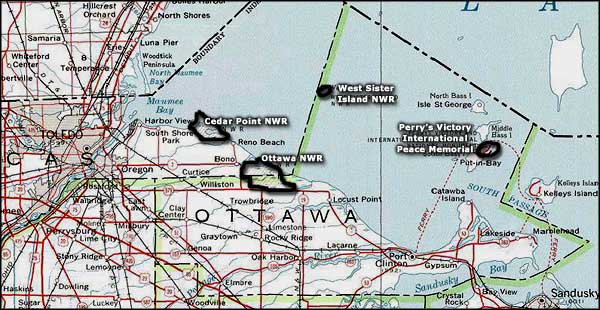