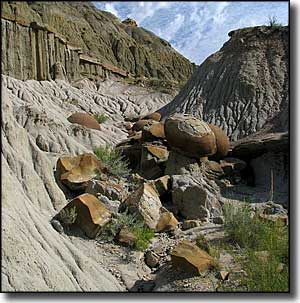 Theodore Roosevelt National Park is a 70,448-acre property composed of three non-contiguous parcels of land in the badlands of western North Dakota. The name comes from the interest Theodore Roosevelt showed in the area. He owned two ranches in the area and the experiences he had while living there in the late 1880's and early 1890's shaped his views on conservation and motivated many of his actions when he was President (1901-1909).

After Roosevelt died in 1919 the North Dakota badlands were surveyed with an eye to establishing a park in the area. There was pushback from local government and local ranchers at first as the land was considered too valuable to cattle ranchers. Then came the Great Depression and the "Dirty 30's." Many landowners were forced to sell their homesteads to the Federal Land Bank for as little as $2 per acre. Much of that land in the North Dakota badlands area became the Little Missouri National Grasslands, then pieces of that eventually became Theodore Roosevelt National Park. In 1934 Civilian Conservation Corps camps were built on what would eventually become the North and South Units of the park. Between 1934 and 1941 the CCC crews built roads, buildings, campgrounds, trails and other improvements, many of which are still in use today.

Today, the park sees about half-a-million visitors per year in the North and South Units. Elkhorn Ranch (the third unit of the park) is still 35 miles up a gravel road from the South Unit and access varies with the weather. Most of the buildings at Elkhorn Ranch were removed and used for other purposes after Roosevelt's death but the foundations were preserved. The property, though, may never see further development as oil prospectors are banging on the door demanding access and otherwise cluttering the surrounding scenery with their production structures.

Theodore Roosevelt National Park offers scenic drives plus about 100 miles of foot and horse trails (although shade and water along the trails is somewhat spotty). Primitive backcountry camping is available but there are three developed campgrounds, too (one on the North Unit, two on the South Unit). Bison, elk and bighorn sheep have been successfully reintroduced to the property and there are signs around the place warning of the potential dangers of free range wildlife... The entire park is fenced with a 7-foot-tall woven wire fence to keep the bison, elk and feral horses in and commercial livestock out. Much of the South Unit west of the Little Missouri River is fenced wilderness, as is the majority of the North Unit. The park also preserves a petrified forest, mixed-grass prairie and outstanding badlands geology.

The park is open 24/7/365 but the South Unit Visitor Center is the only indoor facility open year round (8 am to 4:30 pm in the winter, 8 am to 6 pm from June 1 to Labor Day, closed Christmas, Thanksgiving and New Year's Days). Cottonwood and Juniper Campgrounds are open year-round but limited services are available from October to mid-May (fees are collected year-round). Portions of the Scenic Drives may be closed in winter due to road conditions. 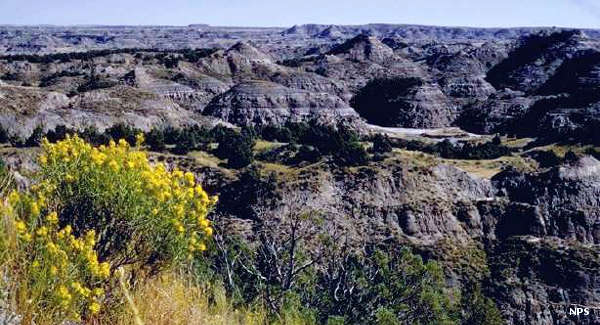 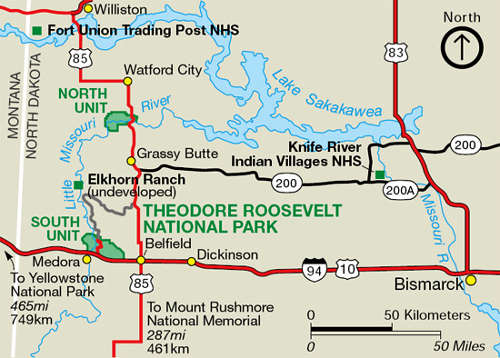 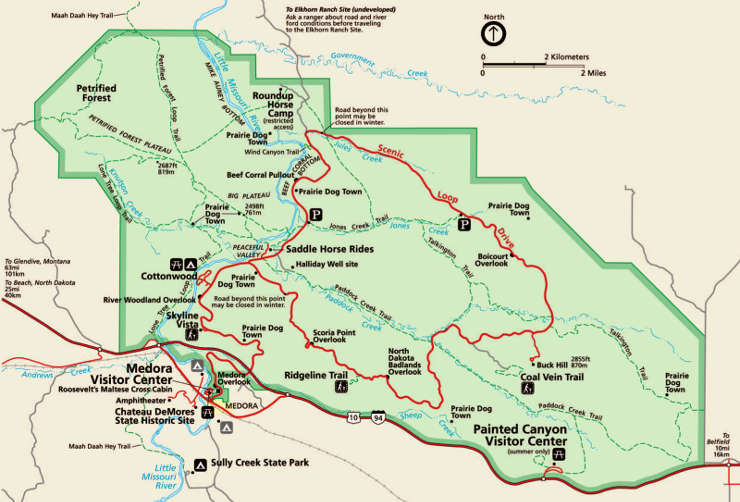 Map of the South Unit of Theodore Roosevelt National Park 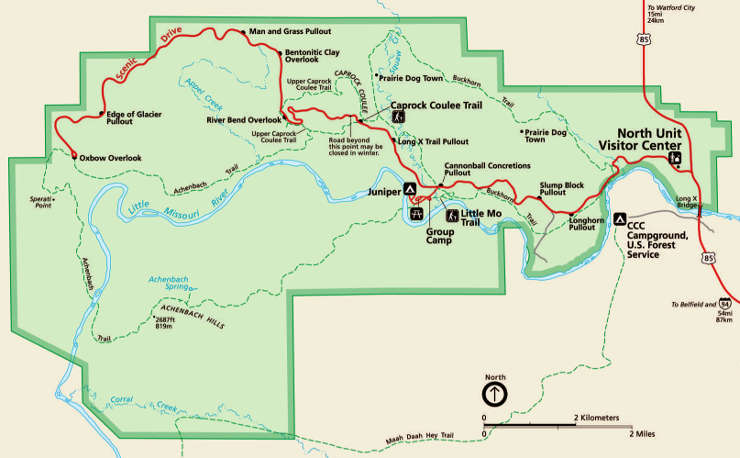