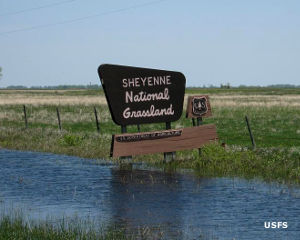 Sheyenne National Grassland is a 70,180-acre property in southeastern North Dakota. Maps generally show the property as one solid block of public land but the reality is that the public land is part of a patchwork of private and state-owned land totaling another 64,769 acres. The land itself is a mix of sandy soils left in the delta of a river that emptied into ancient Lake Agassiz, a glacial lake formed at the end of the last Ice Age as the glaciers melted and retreated north. Eventually Lake Agassiz drained and dried up, leaving this sandy river delta to be eroded into the unique landscape of choppy sand dunes and flat plains we see today.

Sheyenne is the only National Grassland in the tallgrass prairie region of the United States. The Sheyenne Delta area is also the largest chunk of relatively undisturbed tallgrass prairie in the United States. In addition to providing needed habitat for the greater prairie chicken Sheyenne supports sensitive species like the Regal Fritillary, the Dakota skipper and the threatened western prairie fringed orchid.

A 25-mile section of the North Country National Scenic Trail crosses the grassland.

Bordered on two sides by Sheyenne National Grassland, the Brown Ranch (a 1,531-acre Nature Conservancy property) is managed in conjunction with the grassland. The grassland is managed through the use of fire, mowing and prescribed grazing.