The 89,790-acre Mt. Moriah Wilderness lies in the northern Snake Range of White Pine County, about 60 miles east of Ely. The property is administered jointly by Humboldt-Toiyabe National Forest and the Bureau of Land Management, as about 8,700 acres of the wilderness includes BLM land.

Mount Moriah itself rises to 12,067' but stretching north and west from the mountain is a plateau called "the Table" which sits about 11,000' high. As the rock here is mostly eroded limestone, there are a number of shallow caves in the area. Some of these caves show signs of habitation by early Native Americans who left pictographs on some walls. Mt. Moriah Wilderness tends to be quite rugged but there are about 50 miles of primitive trails in the area, with access from several primitive trailheads, some of which can be reached by passenger car along the eastern side of the wilderness.

You'll find limber and bristlecone pine in the higher regions of Mt. Moriah Wilderness with white and Douglas fir, aspen and mountain mahogany below. The lower slopes tend more to the pinon pine/juniper side of things. Rocky Mountain bighorn sheep hang out here year round but most of the area is just summer grazing ground for the large population of mule deer in the area. You'll also find mountain lion, pronghorn antelope, chukar, blue grouse and sage grouse. The four perennial streams in the wilderness carry brook trout, rainbow trout and the unique Bonneville cutthroat trout. Just because there are 4 good streams in the area doesn't mean that water is plentiful: once you start up the hill you'd better be carrying plenty of your own.

About 1,800 acres of the Mount Moriah Wilderness may soon become part of a Natural Research Area. 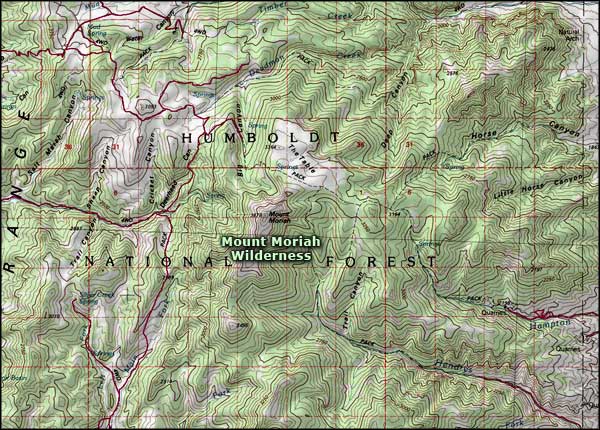 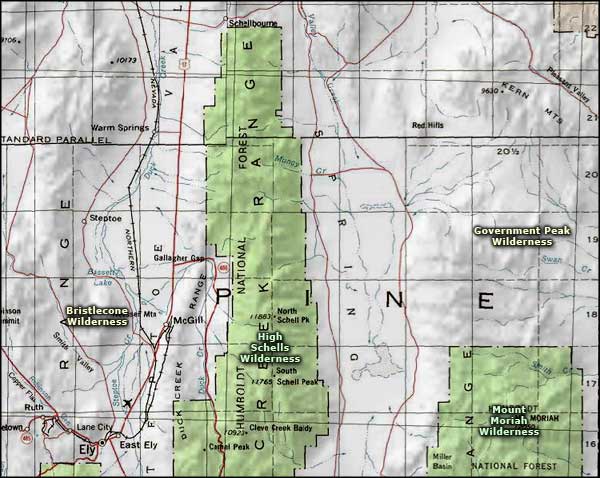