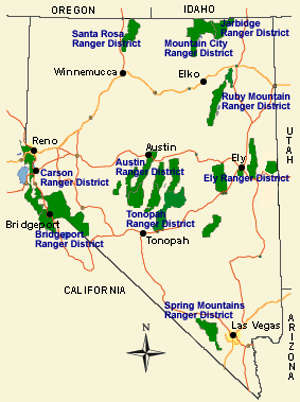 John C. Fremont stamped the name "Humboldt" on the land here back in 1845 when he named the Humboldt River and the East Humboldt Mountains after the German naturalist Baron Alexander von Humboldt.

The vegetation on the Humboldt-Toiyabe National Forest varies from wide open desert with cactus and scrub through Ponderosa pine forests into spruce, aspen and larch, then into lodgepole pine and krummholtz.

The Humboldt-Toiyabe National Forest is included in the ancestral homelands of the Northern Paiute, the Southern Paiute, the Washoe and the Western Shoshone. All of these Native American tribes are descended from the prehistoric peoples that once populated this area from the Sierra Mountains into western Utah, from Death Valley to the Snake River.

There are estimated to be between 80,000 and 100,000 prehistoric and historic archaeological sites within the Humboldt-Toiyabe National Forest. These archaeological sites range from sites with prehistoric rock art to 19th century mining towns, trails and wagon roads. There is a place near Ely where evidence has been found that indicates Native American occupation as early as 13,000 years ago, although most artifacts found in the forest date from only about 4,500 years ago.

Fees for the campgrounds and picnic areas range in price.
Reservations must be made at least 4 days prior to arrival