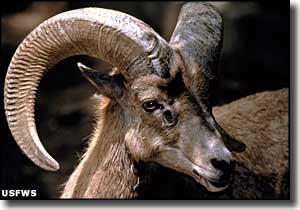 The mission at Desert National Wildlife Refuge is to preserve and protect critical habitat for the desert bighorn sheep. While there are 11 National Wildlife Refuges in Alaska that are larger, Desert NWR with 1,615,000 acres is the largest National Wildlife Refuge in the lower 48 states. The Nevada Test and Training Range occupies a large chunk of this property. The map below will show you that Desert NWR is mostly a series of valleys between rows of north/south trending mountain ranges with a few (usually) dry lakes scattered around. Elevations vary between 3,000' and almost 10,000', so the vegetation is varied as well, with different plant and animal communities existing at different elevations. Annual precipitation varies, too, with the mountain tops usually seeing more than 15" while the valley floors often see less than 4". So, from bottom to top: a zone of creosote bush and white bursage on the desert floor that rises to a level of Mohave yucca and cactus, then a zone of black-brush and Joshua trees that gives way to juniper, pinon pine and big sagebrush, then Ponderosa pine and white fir that rises to the upper ridges of the mountains where only bristlecone pines can survive.

The visitor center is at Corn Creek Springs. About 23 miles northwest of Las Vegas on the side of US Highway 93 there is a sign pointing the way to a 4-mile gravel road that will take you there. Beyond the Corn Creek Field Station there are several dirt-and-gravel roads that head off into the sections of Desert NWR that aren't targets for the Air Force jockeys who are just now learning to drop bombs and operate high-powered, rapid-firing machine cannons... but before you go there you want to have more than enough water, food, gas, camping supplies and spare tires to make sure you can return safely: a problem out here can turn life-threatening very quickly. And the only thing worse than the cell phone service out here is the quantity and quality of the drinking water.

In 1974, some 1,433,100 acres of Desert National Wildlife Refuge were proposed for wilderness designation. Congress hasn't taken action yet but the NWR has been managed as a de facto wilderness since then. That means the two-track cow paths that serve for roads have seen extremely little maintenance in the last 35 years, and those roads are what you have to work with. When roads get too dangerous to use, Fish & Wildlife barricades them.

A lot of folks come here to enjoy the wilderness by hiking, horseback riding, backpacking and camping. While you're traipsing around in this beautiful, other-worldly place, remember that 846,000 acres of it is still in the crosshairs of the US Air Force. And as if that's not enough to think about, the famous Area 51 is just over those hills to the north... 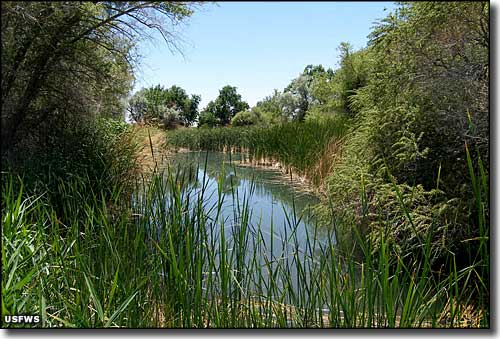 Corn Creek Springs at Desert National Wildlife Refuge (so no, it's not all barren desert) 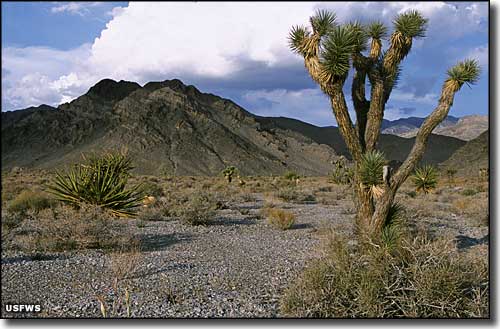 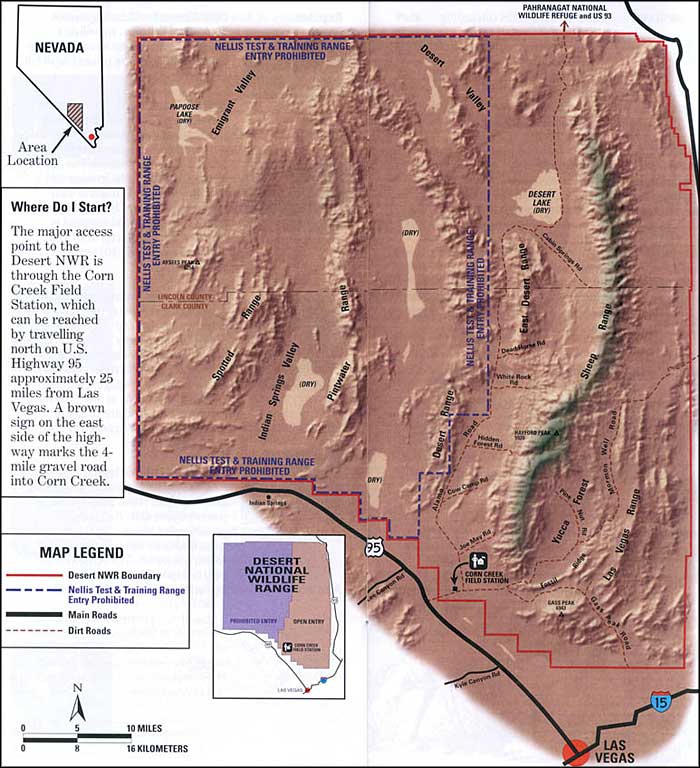