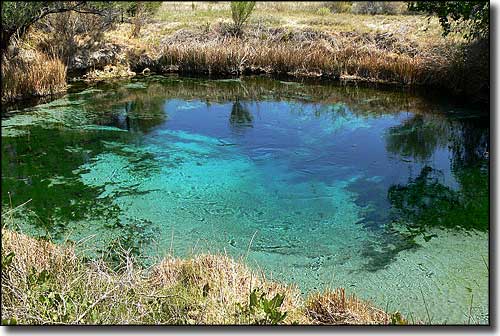 Crystal Springs, one of the many springs at Ash Meadows National Wildlife Refuge 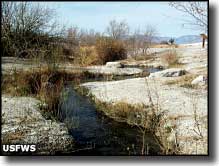 Ash Meadows National Wildlife Refuge is located in an extremely rare desert oasis in the Amargosa Valley of southern Nevada. With the vast desert wastelands of Death Valley being only a few miles away, it's strange to think that here, on the edge of all that emptiness, is about 23,000 acres of spring-fed wetlands with 24 species of plants and animals that are found nowhere else on Earth. One plant and four of the fish found at Ash Meadows are on the endangered species list. The endangered species of fish are the Ash Meadows Amargosa pupfish, Devils Hole pupfish, Warm Springs pupfish and the Ash Meadows speckled dace. There are also three other species of fish in the waters at Ash Meadows but they are all exotic introduced species and Fish & Wildlife is removing them from the ecological chain.

More than 27 species of mammals have been seen at Ash Meadows NWR, along with 5 species of amphibians and 20 species of reptiles. Birds, though, that's a different story. Spring migration is usually during April and May, fall migration from mid-August through September. There are some species that live here all year round but all in all, more than 239 species of birds have been documented on the refuge.

For visitors, the first stop should be at the refuge office where you'll find brochures, an interpretive kiosk and the Crystal Springs Interpretive Boardwalk Trail. The office itself is usually open from 8 am to 4 pm, Mondays through Fridays (except Federal holidays) but with the staffing cutbacks in place these days, there isn't always someone there.

Ash Meadows National Wildlife Refuge was first established on June 18, 1984 but that doesn't mean all the planned amenities are in place yet: the refuge is still in its developmental childhood. So there isn't much for restrooms or drinking water. Picnic tables are rare and camping is just not available. To this point, refuge staff have been mainly occupied with habitat restoration, and have done so well that the Ash Meadows (Amargosa) pupfish has been proposed for removal from the endangered species list. On the other hand, Devil's Hole pupfish occur naturally in only one spot: Devil's Hole. Devil's Hole itself is a non-contiguous parcel of Death Valley National Park and the spring is protected by chain link fence. Two other populations of Devil's Hole pupfish are maintained in other springs at Ash Meadows just in case some disaster hits Devil's Hole. You can see Ash Meadows pupfish in all the various springs but your best chance of seeing one is at Point of Rocks.

Walking the Crystal Springs Boardwalk will allow you to get a good view of threatened plant species like the Ash Meadows gumplant, Ash Meadows ivesia and the spring-loving centaury plant.

The Ash Meadows oasis is in this location because of a geologic fault that allows the discharge of water from an aquifer that stretches off one hundred miles to the northeast. More than 30 seeps and springs come to the surface here, with more than 10,000 gallons of water flowing every minute. With this amount of water being forced to the surface, wetlands and spring/brook channels are all over the place. In the central part of the refuge are sand dunes, some of them rising as much as 50 feet above the surrounding areas. Along the streambeds and around the spring-fed pools, mesquite and ash groves flourish. The drier areas are dominated by saltbush, the elevated dry areas by creosote bush. And yes, this being an oasis in the desert there is cactus spread through the whole area.

During the 1960's and 1970's, Amargosa Valley was a heavily irrigated and farmed area. In the northwestern part of the refuge is what's left of the Carson Slough: historically the largest wetland in southern Nevada. In the 1960's Carson Slough was drained and mined for its peat moss. The financial crisis in the early 1980's (during Ronald Reagan's tenure as President) brought that agricultural operator down, with the result that the US Fish & Wildlife Service came into ownership of this property for new pennies on the old dollar. 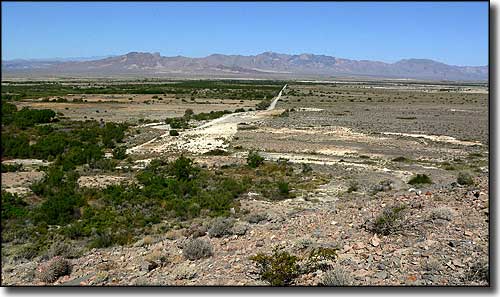 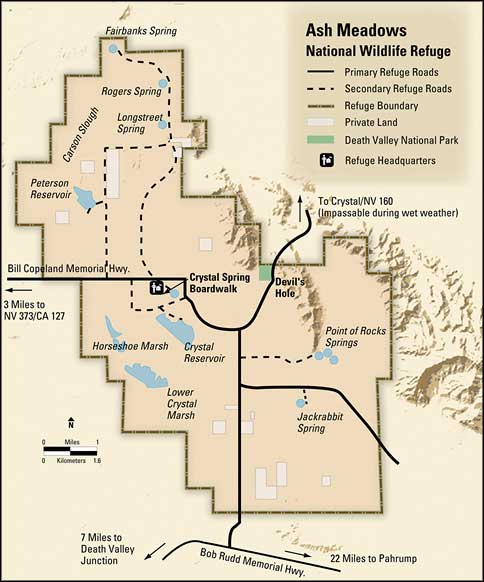