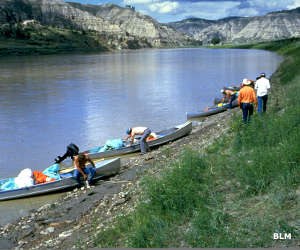 That part of Montana east of the continental divide became part of the United States with the completion of the Louisiana Purchase. The part of the state west of the continental divide was in play with Great Britain for years after that. However, the discovery of gold and copper in the 1850's brought all of Montana into the American fold and Montana Territory came into existence on May 24, 1864. The first territorial capital was at Bannack, a gold camp in southwestern Montana (today, Bannack is a ghost town operated as a state historical park).

Montana saw its share of "Indian troubles," mostly on the eastern plains. Red Cloud's War had the effect of keeping American settlers out of the Powder River Country for a few years but Lieutenant Colonel George Armstrong Custer decided that he knew better than the folks who signed the treaty ending Red Cloud's War. He defied the Sioux claims to the Black Hills, then he defied the terms of the peace treaty with the Lakota Sioux and the Cheyenne. He marched his Seventh Cavalry regiment into the heart of the Powder River Country and decided he was the boss of all he surveyed. It was just outside of Hardin that Custer fought his "Last Stand" and the Seventh Cavalry was wiped out to a man.

A few years later, Chief Joseph led his Nez Perce out of Oregon and Idaho into Montana, intent on getting themselves to Canada where they thought they might be able to get a sustainable fair deal from the government. The Nez Perce had previously been peaceable and had signed treaties that gave up huge amounts of their homeland in return for financial subsidies and guaranteed food from the federal government. Then the government decided (through their Indian agents) not to provide for the tribe during a period of extreme hardship. Starving to death, the tribe picked up their stuff and ran for freedom in Canada. Along the way they repulsed several attacks by American military and citizen's militias. They traveled more than 1,000 miles, beating the Army and the militias again and again until finally, after three days of fighting in a raging blizzard at Bear Paw Battlefield (in north central Montana), they surrendered their weapons and were shipped off to Oklahoma for a few years. Most of them had been stopped about 60 miles short of their goal but some were able to sneak away during the surrender discussions and made their way to Canada. Forty years later, some of the survivors came back from the reservations in Idaho, Oregon and Washington and marked places on the battlefields (Big Hole and Bear Paw in particular) to show what happened and when.

Eastern Montana had a situation in the late 1880's like Wyoming: big freezes turned a lot of cattle barons into sheep barons. At the same time, huge bodies of copper ore were discovered in the Butte area and some of the mine owners there became some of the richest men in history. These days, the areas where those mines were are now Federal Superfund sites... and eastern Montana is being developed for the oil and natural gas that lies deep beneath the hay and wheat fields.