A morning view at Lee Metcalf National Wildlife Refuge
"When we go home I think about our old people. I walk lightly when I walk around. The bones of my Grandparents and their Grandparents are all around here. We return to the Bitterroot each year on a Pilgrimage to honor our connection with our homeland. Also to ensure the preservation of our ancestors' graves and sacred sites. In doing so we acknowledge the gifts left here by those who have gone on before us, gifts of language, songs, dance, spirituality. This way of life has been sustained for generations by our ancestors' prayers." - Louise Vanderburg, a Salish elder

For thousands of years, the Salish people called the Bitterroot Valley "home," and the Stephensville area served as their primary winter camp. The Salish lived a path in which everything exists in a cooperative dependent relationship: the land, the plants, the animals and the people. For them, Nature is not filled with objects to be dominated but with "identities" to be acknowledged and respected. Those relationships are continually affirmed through their conscious and concrete understanding and merging with all the elements of their lifescape. The Salish were among the first inhabitants of North America and, over time, they diverged into several different tribes sharing a common ancestral lineage and common language.

The story of white "American" settlement in the Bitterroot Valley is a story of continual efforts to remove the Salish from their ancestral homeland. The Hellgate Treaty in 1855 established a reservation for the Flathead Nation around Flathead Lake, on the eastern side of the Saphire Range. After that reservation was established, pressure increased to remove the Salish people to that property, too. A second treaty was presented to the last 3 Salish chiefs in the Bitterroot Valley in 1872 but only two would sign it. The third chief, Charlo, remained in the Bitterroot Valley until he and his tribe were escorted to the Flathead Reservation by General Carrington in October, 1891. Since that time, as much as the Bitterroots got their name from light reflecting off the reddish vegetation that grew along the backbone of the mountains, those plants have disappeared and taken that reddish light with them. 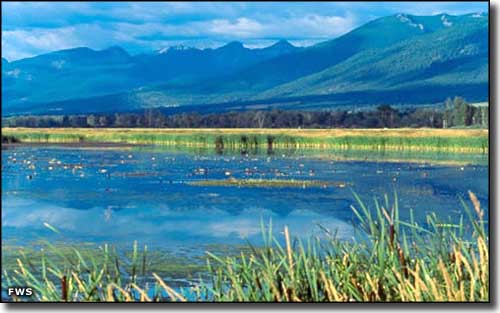 Lee Metcalf National Wildlife Refuge is 2,800 acres of property dedicated to fish, mammals and migratory birds in the Bitterroot Valley. 238 species of birds have been documented on the property, more than 100 of those species also actively nest here. This property is located along the meandering Bitterroot River in the valley between the Sapphire Range and the Bitterroot Mountains.

13 water control structures and a series of dikes hold and manage the water that feeds 10 deep-water wetlands and 3 other, more shallow wetlands for the migratory waterfowl and other birds that love this place. The NWR is mostly a strip of riparian habitat along the Bitterroot River with a higher bench of upland habitat along the eastern border.

Among the mammals on this property you'll find mink, coyote, skunk, beaver, muskrat, bear, elk and moose. Among the birds you'll find Canada geese, teal, mallard, wood duck, pintail, redhead, widgeon and scaup. There are about 20 active osprey nests, too, high in the branches of dead trees along the river. There are also pheasants, tundra swans and the occasional peregrine falcon.

Lee Metcalf NWR offers 2 nature trails and a 1/2-mile paved, universally accessible trail from the parking lot to the picnic area in the 160-acre wildlife viewing area. At the wildlife viewing area is an overlook/fishing structure, information kiosk, benches and outdoor restrooms. The 2 nature trails wander past ponds and sloughs as they pass through the river bottom woodlands. Access is for day use only, overnight camping and fires are not allowed. Fishing is allowed in the Bitterroot River but not in any of the refuge ponds.

To get there: from Stevensville on US Highway 93 (about 30 miles south of Missoula), go east on CR 269 about 1 mile to CR 203. Turn east and go another 1/4 mile to Wildfowl Lane. Turn north on Wildfowl Lane and go 2 miles to the refuge boundary. The headquarters and visitor center are another 2 miles north of the refuge boundary, right beside Pond 6. 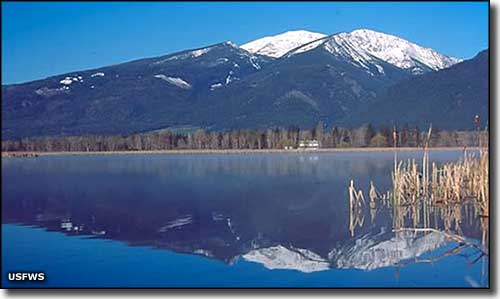 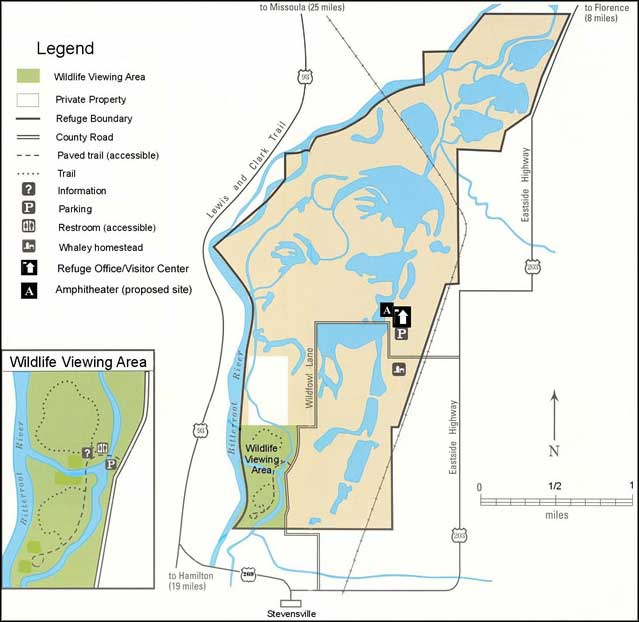