A view in Blodgett Canyon on Bitterroot National Forest 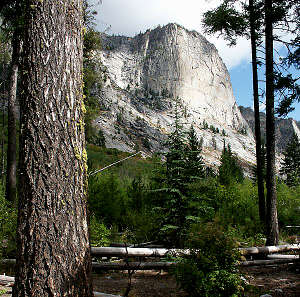 Bitterroot National Forest is comprised of about 1.587 million acres, about 70% of which is in Montana, the remainder in Idaho. The forest essentially spans the Bitterroot and Sapphire Mountain Ranges with elevations varying from about 2,200' at the Salmon River in Idaho to 10,157' at the summit of Trapper Peak (in the Bitterroots along the southern edge of the forest).

As with most National Forests, the Bitterroot is a mix of grasslands and forest. A lot of the lower grasslands and shrublands are leased to private landowners/ranchers for grazing rights. The lower areas tend to be drier than the higher sections of the forest, and also support stands of Ponderosa pine with Gambel oak, and cottonwood forest with riparian habitats along the rivers and streams. The forested sections start out low with lodgepole pine, larch and Douglas fir which slowly give way as the altitude rises to whitebark pine, Engelmann spruce, subalpine larch and subalpine fir, which tree cover tends to end at about 8,000'. Above 8,000' you'll find alpine tundra with grasses and wildflowers below the sheer lifts of stark rock. Bighorn sheep, mountain goat, black bear, moose and elk are found throughout the forest but the small grizzly population confines itself to the depths of the wilderness areas.

Bitterroot National Forest offers 18 developed campgrounds and about 1,600 miles of trails to the visitor. There are dozens of lakes, rivers and streams that provide for some excellent cold-water fishing.

The eastern flanks of the Bitterroot Range have been carved by glaciers over the millenia, and there are now more than 2 dozen scenic, U-shaped valleys cut into the rock of the Bitterroot Lobe of the Idaho Batholith (a large granitic intrusion put in place during the late Cretaceous to early Paleocene eras of geologic time). Most of these canyons rise from the floor of the Bitterroot Valley on the east through these classic glaciated valleys past ancient moraines, hanging valleys, vertical granite cliffs and cirques to the summit ridge of the Bitterroots on the west. One of the finer (and more easily accessed) canyons in the area is Blodgett Canyon. A trail head starts at about 4,000' in the mouth of the canyon just west of Hamilton. It rises as you go west for about 12 miles to the upper rim of the canyon at about 8,500'. In the lower section of the canyon, the granite cliffs rise more than 2,000' above Blodgett Creek. The first 2 miles of the trail were burnt back in 2000, but once beyond that, you'll enter the Selway-Bitterroot Wilderness and lush, green forest. Near the upper end of the canyon you'll come to Blodgett Lake at the bottom of a cirque bowl: at about 6,800' it is surrounded by sheer granite walls and sharp peaks rising another 1,700' (or so).

The Bitterroot Mountains from the summit of El Capitan