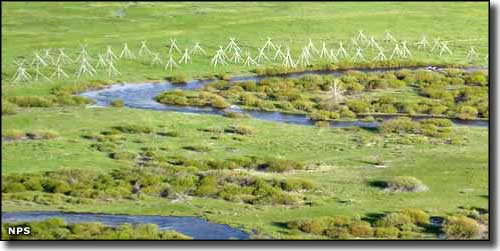 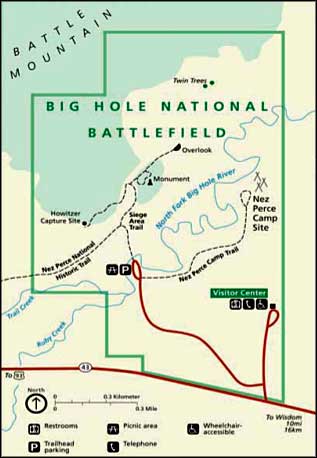 Big Hole National Battlefield honors the Nez Perce and Army soldiers who died here on August 9, 1877. The Battlefield is part of the Nez Perce National Historical Park, a park that commemorates the flight of the Nez Perce in 1877 as they left their encampments in Oregon and Idaho and made a run for Canada and, hopefully, their freedom. The whole thing came about because agents of the United States Government refused to honor the treaties the government had signed with the Nez Perce several years earlier.

1877 was an very hard year for the Nez Perce and they were starving to death. The provisions of that treaty that forbade them from going to the places where their ancestors had gone to get food for hundreds (if not thousands) of years were being enforced by the Army. But those provisions for giving them food and the money to purchase food were being ignored. What food was being distributed by the Indian Agents of the time was too little for the tribe and was often spoiled before it got to them. So several hundred warriors, with their wives and children, packed up and headed for Canada with Chief Joseph in the lead.

On August 7, 1877, the Nez Perce arrived at an old campsite in the lush Big Hole Valley. They thought they were far enough ahead of General Howard and his men that they could rest a bit. They didn't know that Colonel John Gibbon and 162 men from 5 different Montana forts were advancing on them from the other direction. Gibbon's scouts spotted the encampment on the afternoon of August 8 and prepared to mount a dawn attack the next morning. However, one of the Nez Perce warriors got up early to check on his horses and stumbled on the hidden soldiers in the twilight. The shooting started immediately. The troops advanced quickly into the camp, shooting indiscriminately into the tipis and at any moving people. The soldiers shortly occupied the northern end of the camp but the Nez Perce quickly organized themselves and began a counterattack. Their deadly shooting soon forced the Army to retreat across the river and the soldiers were essentially pinned down for the next 24 hours. Some of the soldiers did manage to maneuver a 12-pounder mountain howitzer into a position up the hill above their besieged troops and fired two shots into the Nez Perce camp. Then a group of Nez Perce horsemen descended on them and took the weapon, dismantling it and scattering its parts.

As the day wore on, the Nez Perce began taking care of their wounded, burying their dead, gathering their horses and making preparations to move on. Some warriors stayed behind to keep the soldiers busy while the rest of the group headed south and made their escape. On the morning of August 10, the last remaining warriors fired a few more rounds in the direction of the soldiers, then made their escape, too.

General Howard and his men arrived over the mountains from Idaho on August 11 and found Gibbon's command broken and out of action. Colonel Gibbon himself was one of the forty soldiers wounded in the fight. Technically, the Nez Perce had won the battle but winning the battle almost broke their spirit: almost 90 Nez Perce and 29 soldiers and volunteers were dead. Among the Nez Perce dead, two-thirds were women, children and old men.

Nez Perce National Historical Park contains 38 sites spread across four states (Oregon, Idaho, Montana and Washington). Big Hole National Battlefield offers a visitor center and an overlook on the site of that battle. The theater in the Visitor Center offers continuous showings of Weet'uciklitukt: There's No Turning Back, Battle at Big Hole, an award-winning film that chronicles the story and the tragedy that took place here.

PS: In 1883, the Federal government erected a 6-ton monument on the site to commemorate the soldiers and volunteers who died here in 1877. Forty years later, the Nez Perce returned to the site and erected their own monument to their own people...