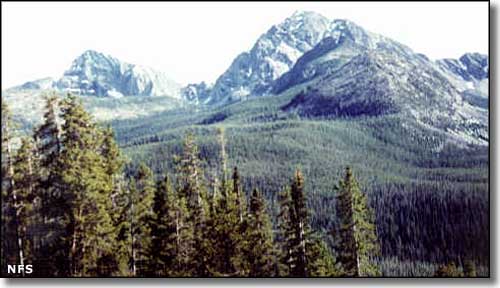 The 158,615 acres of the Anaconda-Pintler Wilderness straddle the Continental Divide as it follows the crest of the Anaconda Mountain Range. This is a heavily glaciated landscape of high, rugged peaks, sharp cirques, wide U-shaped valleys, and layers of glacial moraines. Runoff from the snowfields above timberline feeds into crystal clear streams and sparkling alpine lakes before heading further down the hill over cascades of boulder-filled waterfalls. The lakes tend to be frozen over until mid-July, but once they're open you'll find excellent fishing for 4 species of trout and 3 species of char, plus arctic grayling and Rocky Mountain whitefish. It also helps that Montana Game and Fish keeps the lakes well-stocked. The headwaters of Rock Creek are classed as a Blue Ribbon trout stream, then there's the upper branches of the Big Hole and Bitterroot Rivers...

Elevations range from a low of about 5,100' to the summit of West Goat Peak at 10,793'. The usual big game suspects are prowling in these woods: deer, elk, moose, mountain lion, black bear and mountain goat. At the lower end of the hill you'll find sagebrush and willow flats that quickly rise to fir, pine and spruce that also quickly give way to the pine, fir, larch and aspen that run up to treeline. Above treeline is just bare rock and talus with a bit of lichen thrown in. A 45-mile chunk of the Continental Divide National Scenic Trail follows along the crest of the Anaconda-Pintler Wilderness. In spite of the hundreds of miles of other trails in this beautiful wilderness, you'll find most of the human visitors to the Anaconda-Pintler Wilderness on this one trail. Easiest access to the Anaconda-Pintler Wilderness is via trail heads at Moose Lake and Lutz Creek on the north side and trail heads at Pintler Lake on the south side. There's also an excellent trail from the west that follows the East Fork of the Bitterroot River right up under West Pintler Peak.

The Mussigbrod and other, smaller forest fires of 2000 caused serious damage to a lot of the forest north of Pintler Pass, including the area around Johnson Lake. 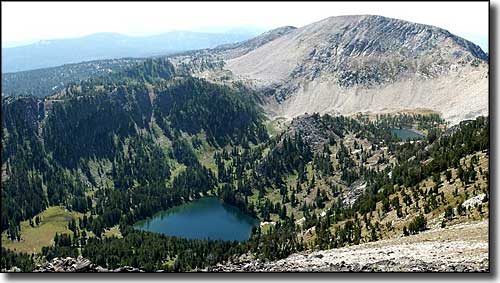 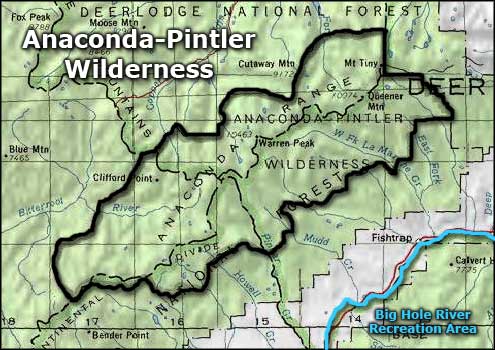 East Fork Trail #433 follows along the bottom of the canyon of the East Fork of the Bitterroot River almost to its source in the cirque below West Pintler Peak. This entire route is within the Anaconda-Pintler Wilderness so foot and horseback access only is the rule. The hiking is relatively easy with short climbs to Starr Falls and again to reach the lake basin. A lot of this area was burned during the fires of 2000 and you'll come across the whole panoply of after-fire effects, from areas hardly touched to areas severely burned. While you may come across lots of new grasses, wildflowers and young lodgepole pines in the burned areas, you also need to be cautious in areas of still-standing burned trees, especially when the wind is blowing. If you are traveling with pack animals, you may want to keep your ax and saw handy.

There's a lot of wildlife along this trail. Below Starr Falls you'll find beaver ponds and willow thickets that attract moose. In the heavily burned area above Starr Falls there are lots of bluebirds and woodpeckers. As this is deep canyon with rocky cliffs rising above, you may see several mountain goats looking down on you.

To get there: Find the East Fork Road (FR #472), about 40 miles south of Hamilton on US Highway 93. Turn east on FR 472 and go about 18 miles to FR 784. Turn south on FR 784 and go about 2 miles to the trail head. Fallen snow doesn't get plowed so access by vehicle is sometimes hard. There is plenty of parking at the trail head but camping is not allowed. There is also a stock ramp and unloading area with hitch rails, and plenty of room to park your trailer(s). 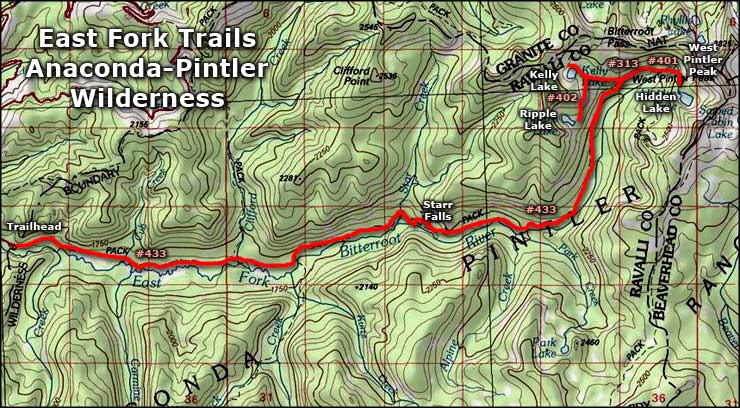