At Swan Lake National Wildlife Refuge during a migration 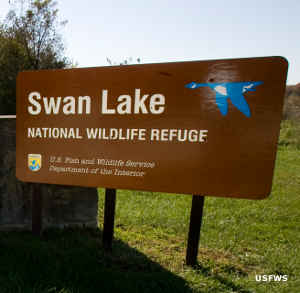 Swan Lake National Wildlife Refuge is a 10,795-acre property in north-central Missouri near the confluence of the Missouri and Grand Rivers. Shortly after the refuge was established in 1937, the Civilian Conservation Corps arrived and worked their magic on the land, helping it to recover from the damage done previously by the Euro-American farmers who arrived in the area in the mid-1800's. They surveyed the refuge, built water containment and control structures, then built roads and buildings.

Swan Lake National Wildlife Refuge was established to provide a sanctuary for migratory waterfowl. The refuge is managed with that objective in mind. About 1,000 acres of the refuge is managed as cropland to provide supplemental food for the migrating birds. Slowly the plowed fields are changing back to wet soil units as the refuge staff expand the water control structures on the property. However, the eastern part of the refuge is vegetated with a remnant of the tallgrass prairie that once covered half of Missouri and those grasslands don't appreciate too much water.

In the spring and fall migration seasons more than 200,000 birds pass through. Bald eagles are present year-round but their numbers rise as eagles pour in, following the birds making the fall migration. There are also red-shouldered and red-tailed hawks on the refuge year-round. The refuge also plays host to many neo-tropical migrant birds such as Baltimore orioles, summer tanagers, eastern phoebes and varous species of sparrows.

In additon to the 250+ species of birds seen on the refuge there are also white-tailed deer, river otters, raccoons, fox squirrels,beaver, coyotes, muskrats, opossums, and cottontail rabbits.

The refuge is a day-use only property, open generally from sunrise to sunset. The auto tour route is open from the first Saturday in March to the last sunday in October, sunrise to sunset. Camping is not allowed anywhere. The cross-country hiking is better in summer after the water levels have been drawn down but much of the property remains wet all year.

A view at Swan Lake NWR in the summer 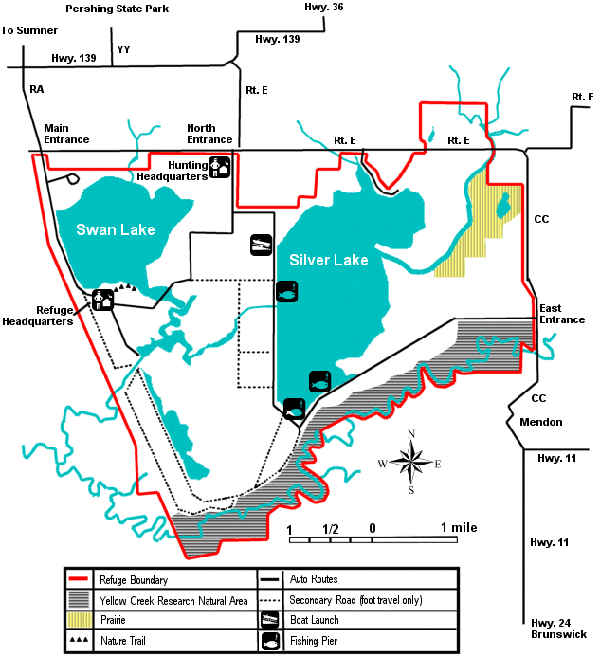 Photos and map courtesy of the US Fish & Wildlife Service