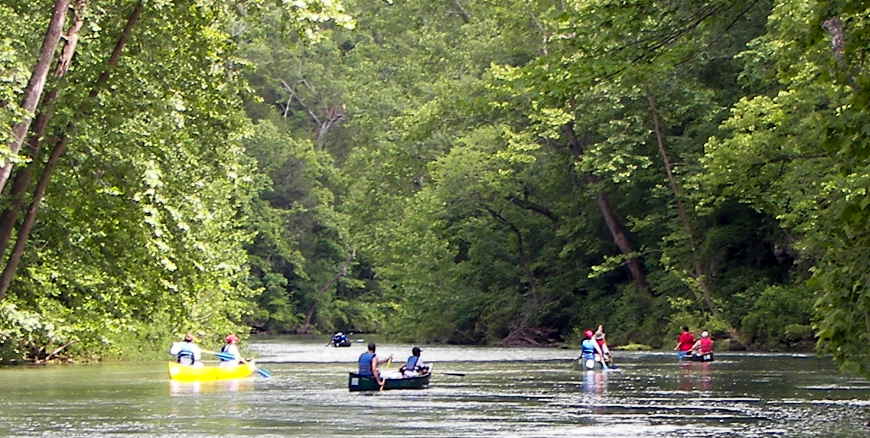 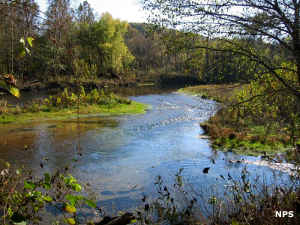 Ozark National Scenic Riverways is an 80,000-acre property running along the corridors of the Jacks Fork and Current Rivers. Congress created the park in 1964 but it wasn't dedicated until 1971. The park was created to preserve and protect the two rivers as the Current River is probably the most popular float river in the Midwest.

The Current River is fed by the United States' largest concentration of first magnitude freshwater springs in dolomite rock, as opposed to the igneous-based springs of the Snake River Valley in idaho or the limestone-based springs around Gainesville, Florida. A first magnitude spring is defined as having an average waterflow of 100 cubic feet per second and at least nine of them feed the Current within the park.

The park headquarters in Van Buren offers a visitor center that is open daily from Memorial Day weekend to Labor Day and weekdays the rest of the year, from 8 am to 4:30 pm. From October to April the Visitor Information Center is closed on Federal holidays, too. The Alley Spring and Round Spring Visitor Information Centers are open 8 am to 4:30 pm from Memorial Day weekend to Labor Day only. There are no fees involved in visiting the Ozark Riverways but all camping, developed and backcountry, costs money. Picnic areas are free until you need a reservation. That reservation costs money. Tours of Round Spring Cave also cost a few bucks. As this is 2017 and President Donald Trump has recently slashed the budget of the National Park Service I have no idea what's going to happen to the fees...

Two Rivers, the confluence of the Jacks Fork and Current Rivers