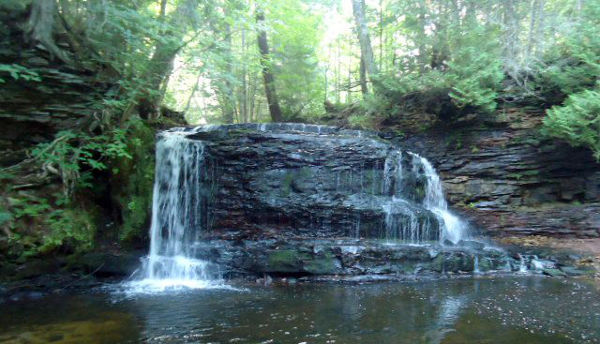 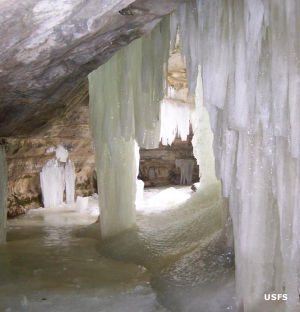 Rock River Canyon Wilderness is a 4,722-acre property in Hiawatha National Forest on the Upper Peninsula of Michigan. The wilderness came into existence with passage of the Michigan Wilderness Act of 1987.

The primary features of the wilderness area are two canyons cut into the bedrock by Rock River and its tributary, Silver Creek. The canyons drop about 150 feet below the essentially flat tableland the area is comprised of. The majority of the area is treed in hardwoods (maple, beech, birch and quaking aspen) and conifers. Elevations vary from about 680 feet to about 1,000 feet.

Logging in the area ended in the 1930's when they ran out of trees to cut. What we see today is all second-growth and the area is criss-crossed with old logging trails and a couple old railroad grades. The canyons themselves were almost untouched by the loggers. Except for a couple old stumps and some decaying hardware we might not know they ever descended to the streams.

Along the edges of the canyons erosion has carved caves into the underlying sandstone. Many of these caves are between 10 and 40 feet deep. In winter, water seepage flows over the canyon edges and forms sheets of ice hanging down the walls of the canyon. That has led to the busiest season in Rock River Canyon Wilderness being from mid-December to mid-March when the ice climbers come out. Ice climbing doesn't destroy the friable rock the way rock climbing does, and rock climbing is dangerous because the rock is so soft and friable. Watching ice climbers in action can be dangerous: ice axes chip off a lot of ice and it flies up to 20 feet in all directions. The Eben Ice Caves are probably the most popular destination in the wilderness area and they are usually reached by parking and crossing private land to reach the main "trail." When the ice has melted, all that remains are caves filled with algae and dense undergrowth.

A common destination in the wilderness is Rock River Falls, a 15' waterfall most prominent in the spring. Just downstream from Rock River Falls is Ginpole Lake, a secluded 13-acre lake. The lakes and streams offer 18 species of fish, including rainbow trout, brook trout, brown trout, coho salmon and northern pike.

The understory in the Rock River Canyon Wilderness is dense and travel requires good bushwhacking/route-finding skills. In the center of the wilderness is an 80-acre tract that has been proposed for designation as a Research Natural Area due to the rare combination of unique flora, undisturbed since the late 1800's. There is another area containing an old growth stand of northern hardwoods nearby, also almost undisturbed since the late 1800's.